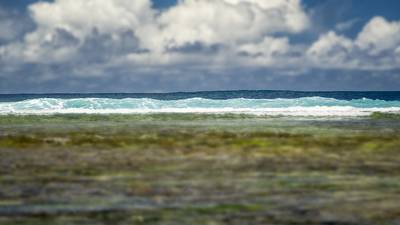 U.S. Commerce Department Secretary Wilbur Ross sent a report to the White House on Wednesday containing recommendations on whether to change the boundaries of 11 marine sanctuaries to allow more oil and gas drilling, but the report was not made public.
Commerce reviewed sanctuaries containing 425 million acres of coral reefs, marine mammal habitats and pristine beaches, as part of an administration strategy to open new areas to oil and gas drilling. The goal was to “put the energy needs of American families and businesses first,” according to the order Trump signed in April that triggered it.
Previous presidents designated the 11 marine sanctuaries for protection. Oil industry executives have said there is little appetite for drilling in the marine sanctuaries, citing costs, public opposition and other factors. Environmental groups have said the Commerce report should be made public.
"The report is currently undergoing inter-agency review," a Commerce Department spokesman said, adding that decision on when to make the findings public will be up to the White House.
The White House did not immediately respond to a request for comment.
Commerce's National Oceanic and Atmospheric Administration received nearly 100,000 public comments on the sanctuaries and marine monuments under review. The vast majority were in favor of retaining the current protections.
In August, Interior Secretary Ryan Zinke sent to the White House a similar report that followed a review of nearly 30 national monuments designated using the federal Antiquities Act but did not release the findings to the public.
A leaked memo of his recommendations to resize at least six of the 27 reviewed monuments was published by the Washington Post in September.
"The American people own these public waters. They deserve to know what the Commerce Department is doing with them," said Sarah Chasis, director of the oceans program at the Natural Resources Defense Council.
Last month, energy industry representatives told Reuters that despite the Trump administration's focus on drilling, opening up marine monuments and sanctuaries would likely result in more opportunities for wind power companies, which Trump has lambasted.
Catherine Reheis-Boyd, president of the Western States Petroleum Association, said none of the members of her trade group were interested in drilling in four marine sanctuaries off California’s coast that are under review.
Government offshore drilling lease data reviewed by Reuters shows the oil industry is bidding less money on less offshore acreage than it has in years.