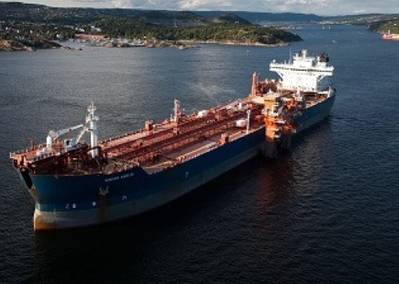 'Navion Anglia' (pictured) has commenced the sea passage to Las Palmas with the HiLoad Dynamic Positioning No. 1 safely docked at her port side.

Late 2012, Teekay Offshore announced an agreement to acquire this self-propelled dynamic positioning (DP) system that attaches to and keeps conventional tankers in position when loading from offshore installations. Now Teekay say that the HiLoad DP is safely docked to the 'Navion Anglia' and bound for operation at Las Palmas, in the Canary Islands. The vessel departed the Norwegian port of Kirstiansund in southern Norway on a 10-year time charter contract with Petroleo Baislero SA (Petrobras).

The design of the 2010-built unit was inspired by the Remora fish – one of the world’s most fascinating creatures that employs suction to attach itself to larger creatures such as sharks and whales. Teekay’s new HiLoad DP is no different – it connects to any type of tanker keeping them in a safe distance from the production unit.

More photos of the HiLoad are at: