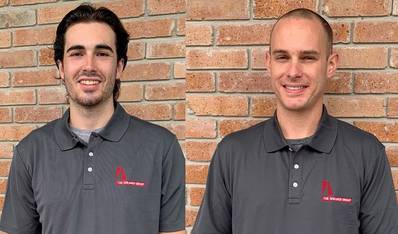 Bonnaure graduated from Texas A&M University with a B.S. in Ocean Engineering and was the Senior Captain of the Texas A&M Human Powered Submarine Team, where he redesigned a new controls system for a one-man submarine. For his undergraduate research project, Bonnaure assisted in the development of a free running model of a high-speed watercraft meant to be self-propelled and controlled remotely. he also took a four-week course in Italy, studying the theory of structures and finite element analysis.

Before working at TSGI, Bonnaure worked as a Field Engineer Intern at Manson Construction Co. in Long Beach, Calif. He assisted in the development and construction of a 1,400+ linear foot section of a reinforced concrete wharf and in the coordination of various subcontractors.

Frost graduated from the University of Michigan with a B.S. in Naval Architecture and Marine Engineering. He is a four-year veteran of the U.S. Marine Corps (1st Battalion, 6th Marine Regiment), where he led a squad of Marines in the execution of over 300 security patrols and force protection missions over the course of deployment to Sangin, Afghanistan.

Before working at TSGI, he was a Research Assistant at the Royal Caribbean International in Miami, and at the Marine Hydrodynamics Laboratory at the University of Michigan. Frost wrote engineering reports, including physical designs, experimental approaches, and analyzed experimental data.

Tallink Grupp announced it recently signed a charter agreement for its Latvian-flagged cruise vessel Romantika, which has…