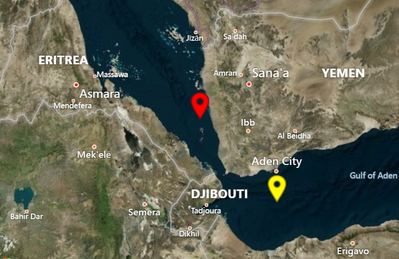 The place of the attack marked by the red pin - Credit: UKMTO

A vessel has been attacked 34 nautical miles (63 km) southwest of Yemen's Hodeidah, the United Kingdom Maritime Trade Organisation (UKMTO) reported on its website on Thursday, adding an investigation is underway.

British maritime security company Ambrey Intelligence said the incident involved a sailing vessel that managed to escape an attempted boarding from occupants of skiffs, and that the crew has been reported safe.

It said the vessel was "likely Hong Kong-flagged" but did not give further details.

A U.S. Navy's Fifth Fleet spokesperson told Reuters the navy is aware of an incident in the Red Sea.