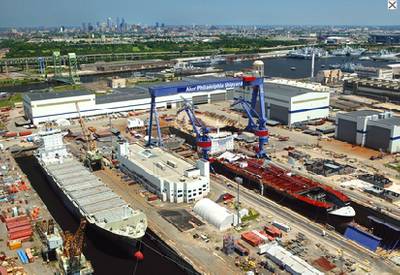 The ceremonial keel-laying was for the first of two Aframax tankers that it is building for SeaRiver Maritime, Inc. (SeaRiver), Exxon Mobil Corporation’s U.S. marine affiliate.

The construction of the two tankers, valued at $400 million, will create more than 1,000 jobs. When completed in 2014, the Liberty Class vessels will be 820 feet long and be capable of carrying 115,000 tons of crude oil. The tankers are intended to be used to transport Alaskan North Slope crude oil from Prince William Sound to the U.S. West Coast.

Keeping with long held shipbuilding tradition, coins were placed on one of the keel blocks before the 230 ton unit was lowered into place in the dry dock. Representatives from SeaRiver and APSI placed the coins as a ceremonial sign of good fortune and safe travels.

Kristian Rokke, President and CEO of APSI said, “This is an important milestone, rich in tradition that excites the shipbuilder in each of us. Together, we are part of something special—constructing another quality vessel born here in Philadelphia that will serve the needs of our customer and the U.S. Jones Act market for decades to come.”

A team of Finnish maritime industry partners are developing plans to build a cargo vessel that runs on green ammonia.Shipping company Meriaura…