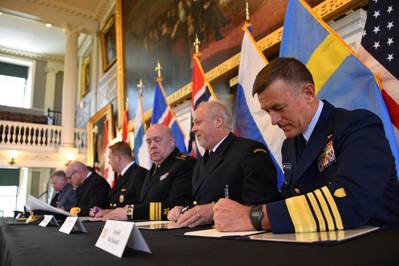 Leaders representing all eight coast guard agencies of the Arctic nations met to sign a joint statement establishing the framework for a multi-year strategic plan for the Arctic Coast Guard Forum.
The Arctic Coast Guard Forum is an operationally-focused, consensus-based organization. Membership includes Canada, Denmark, Finland, Iceland, Norway, Sweden, the Russian Federation and the United States.
Since the Arctic Coast Guard Forum was officially launched during a Principals Meeting in New London, Conn., last October, working groups have established strategies, objectives and tactics aimed towards achieving common operational goals in the region. In addition, agency representatives attended the Icelandic Search and Rescue Table Top Exercise in Reykjavik, Iceland, in April, sharing best practices and lessons learned.
"Today's signing ceremony marks the culmination of months of collaboration by all eight Arctic coast guards," said U.S. Coast Guard Commandant Adm. Paul Zukunft.  "The Arctic coast guards now have an established framework to exchange information and are finalizing a set of combined operating guidelines to enhance interoperability.  This year we will hold a table top exercise culminating in a live exercise in 2017 to address safety of life at sea and the challenges of a mass rescue scenario as more and more cruise ships ply this harsh and unforgiving environment.
The Arctic Coast Guard Forum will reconvene for an experts meeting in fall 2016.