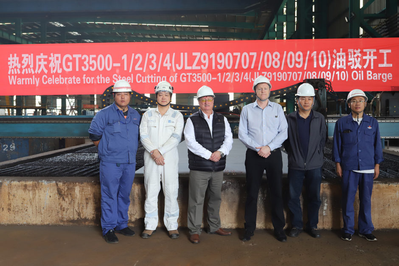 On October 10, 2019 the steel cutting ceremony took place at Jiangsu Jinling Shipyard, Co. Ltd. in Yizheng, China (a subsidiary of the Nanjing Jinling Shipyard) for four oil/deck cargo barges being constructed for the Government of the Northwest Territories in Northern Canada.

Steel blocks will be constructed at the Yizheng shipyard and then barged approx. 50 kilometers up the Yangtze River to Nanjing Jinling Shipyard for final assembly. Following steel cutting the construction is expected to take 9 months, with the barges being ready for delivery in Shanghai by July 2020.

The barges are designed to Lloyd’s Class Rules for double hulled oil barges and are compliant with MARPOL and Transport Canada Rules and Regulations. Each barge will be capable of carrying liquid petroleum cargoes and containerized and bulk deck cargoes.

The barges are designed for operations in the Beaufort Sea and for shallow draft operations on the Mackenzie River in Northern Canada.