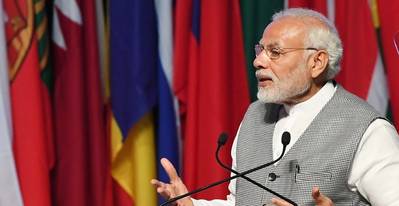 Stena Bulk  chief executive and president Erik Hanell wrote to Indian prime minister Narendra Modi to personally enter the efforts to secure the release of UK-flagged tanker ship Stena Impero and its primarily Indian crew members, who have been detained in Iran since mid-July.

According to media reports, the owner of British-flagged oil tanker Stena Impero, which was seized by Iran on July 19 with 23 crew, including 18 Indians on board, has appealed to  Modi personally intervene to negotiate with Tehran.

The oil tanker Stena Impero was seized by Iran while passing through the Hormuz Strait. It was done in retaliation, after Iran's own tanker Grace 1 was detained by Britain in the Strait of Gibraltar.

"Since the ship was seized by the Iranian Revolutionary Guards while passing through the Hormuz Strait, the crew members have been detained on the vessel at anchor off Bandar Abbas," he wrote in the letter.

Hanell said while the seafarers are proud professionals, "they are becoming increasingly concerned about their fate and their families, increasingly worried about the continued detention of their loved ones, particularly as they are guilty of no crime".

According to NDTV,  India's External Affairs Minister S Jaishankar said the Indian embassy in Tehran is in "constant contact" with the Iranian authorities for the release and repatriation of the 18 Indian crew members on board Stena Impero.