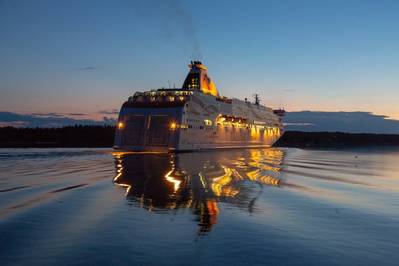 Similarl to the group’s newest vessel Megastar, the new shuttle ferry will also be dual fuel operated, its overall length will be approximately 212 meters and with a passenger capacity of 2,800, said a press release from the Estonian shipping company operating Baltic Sea cruiseferries and RoPax ships from Estonia to Finland.

The vessel will cost approximately 250 million euros and it will be built at the Rauma shipyard in Finland, with delivery expected in January 2022.

The new vessel is another step for Tallink Grupp towards achieving even greater energy efficiency and eco-friendliness for its shipping operations. The new shuttle ferry, with a gross tonnage of approximately 50,000 and a service speed of 27 knots, will use LNG as main fuel and meet all the current and future known emission regulations.

According to the contract, 30 percent of the total cost will be paid during the construction period and the rest after the delivery of the vessel. AS Tallink Grupp plans to finance 70 percent of the new ship cost in 2022 by long-term loan.

Commenting on the contract, Paavo Nõgene, the CEO of Tallink Grupp, said: "The construction of Megastar and bringing this next generation vessel onto the Baltic Sea, has transformed our shuttle service between Tallinn and Helsinki. The vessel has been extremely well received by our customers, with over 4 million passengers already having traveled on the vessel. In addition to the increased passenger comfort, just as importantly, Megastar has taken our operations also to the next level in terms of environmentally friendly operations and increased efficiency."

Paavo added: "It was therefore only logical that a similar vessel should be built for the route sooner or later to enhance our operations on this important route for us even further. We are pleased to have signed the construction contract with RMC, thus supporting also our regional economies due to the construction taking place in Rauma, and we look forward to starting the shipbuilding process.“

Commenting on the contract, Jyrki Heinimaa, the CEO of RMC, said: "The project itself is extremely awaited in Rauma, since it allows us to continue our amicable co-operation with our colleagues at Tallink, of which we have had great experiences already since the beginning of the millennium, when M/S Romantika was under construction in Rauma as the first newbuilding ferry of Tallink Grupp.“

A double-ended ro-pax ferry Nairana has been launched for service to Bruny Island in Tasmania. The Incat Crowther 44 design…