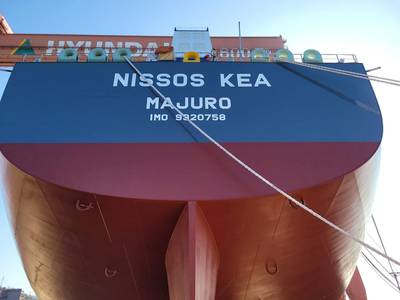 A Greek oil tanker is unscathed after being targeted by a Houthi drone attack in Yemen's port of Ash Shihr.

"Neither explosion impacted the vessel. All crew is safe and unharmed. There was no damage to the vessel and no pollution," the Greek shipping company said in a statement.

The attack, which follows the expiry of a truce between Houthi rebels and pro-government forces earlier this month, could signal
potential danger for commercial shipping in Yemen and nearby waters. War has raged in the country since 2014.

The 300,000 dwt tanker Nissos Kea was reportedly scheduled to load 2 million barrels of crude oil, but it left the port for international waters following the blasts.

"All necessary precautionary measures were duly taken beforehand and during the incident," Okeanis said. "The relevant authorities have been kept closely informed, as required."

"The company is satisfied that its health and safety protocols, which are well-designed to deal with such circumstances, were appropriately applied to ensure the safety of our vessel and our crew in a timely manner."

The European Union issued a statement condemning the incident, calling the attack an "unacceptable" and "flagrant menacing of international maritime commerce".

"Houthi attacks on international shipping are an affront to core principles of the Law of the Sea, jeopardizing freedom of navigation through the region’s waterways and blocking access to Yemeni ports. They deprive Yemenis the ability to afford fundamental necessities and could impact the flow of essential goods into Yemen," the EU statement said.

"The path forward is to reduce tensions, de-escalate, and redouble efforts to end Yemen’s conflict through a negotiated settlement. This is the only way to ensure that all Yemenis can benefit from the country’s resources and enjoy a more prosperous future. We will continue supporting efforts led by UN Special Envoy Grundberg to renew the truce and reach a political settlement to the conflict in Yemen."