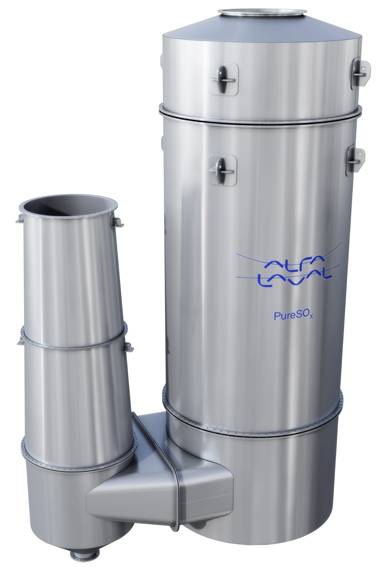 After months of intense preparation, the doors of the Alfa Laval Test & Training Center in Aalborg, Denmark are open. Located on the site of the former Aalborg shipyard, this massive ship simulation facility – the largest and most advanced in the marine industry – now adds considerable muscle to Alfa Laval’s research and development efforts.

The Alfa Laval Test & Training Center comprises a 250 m2 testing area, built around a 2 MW marine engine and comprising commercial and prototype equipment from all of Alfa Laval’s marine product groups. Connected to the test system are a dedicated control room and a training complex, as well as the nearby Limfjord, which supplies it with seawater via an 800 m pipeline.

Visitors received their first look at the operational facility during an inauguration ceremony on 15 January, when the start button was pressed by Peter Leifland, President of Alfa Laval Marine & Diesel.

Stepping aboard a vessel on land
The highlight for those attending the inauguration was not the pomp and circumstance, but rather the opportunity to be guided through the Alfa Laval Test & Training Centre’s inner workings. While their colleagues mingled or spoke with Alfa Laval representatives, small groups of visitors were guided among the facility’s interconnected process lines.

These process lines are full size and organized much as they would be on an actual vessel at sea, though connected to a unified control system. They comprise a fuel line, an integrated water line, a steam line and an exhaust line, as well as the heat exchangers and other auxiliaries needed to support them. As visitors were guided through, they were able to speak with Alfa Laval experts stationed at key equipment, who provided insights in applications from fuel cleaning and conditioning to waste heat recovery and exhaust gas cleaning.

“After only a half-hour tour of the Alfa Laval Test & Training Center, you come away with an impression of just how deep the knowledge is,” says Lars Skytte Jørgensen, Vice President of Alfa Laval Product Centre Boilers. “The centre really is similar to a machine room, and you get a sense of all the connections – not only between the equipment and process lines, but between all the areas of expertise across Alfa Laval.”

A springboard to environmental compliance
One of the key aspects that comes across at the Alfa Laval Test & Training Center is Alfa Laval’s drive to ensure cost-effective compliance with environmental legislation. This is made especially clear by the large PureSOX installation, located at the test system’s heart. Exhaust gas cleaning technology was the initial reason for building the facility, in which it now takes pride of place.

Apart from further development of PureSOX, which has recently seen repeat orders from both DFDS and Spliethoff, the centre will be working with NOX reduction in association with Haldor Topsøe. This project will focus on selective catalytic reduction (SCR), which is a technical alternative to exhaust gas recirculation (EGR), a process already supported by Alfa Laval’s PureNOX.

“As emission caps approach, such as the SOX limits appearing in 2015, Alfa Laval is committed to helping customers meet them,” says Jens Peter Hansen, Alfa Laval R&D Manager, Exhaust Gas Cleaning. “Scrubber technology has already proven effective and commercially viable, and we will continue to refine exhaust gas cleaning through our work here at the centre.”

Making new strides in energy efficiency
In other areas as well, the Alfa Laval Test & Training Center will be working to combine greener methods of operation with financial benefit. Energy efficiency will be heavily explored at the facility, as a means of both saving money on operating costs and further reducing CO2 and other emissions.

Among the facility’s key components in this regard is the new FCM One, which builds on the strengths of Alfa Laval’s original Fuel Conditioning Module. With the FCM One’s unique integration of heating and cooling functions, a more efficient changeover between HFO and distillates can be managed. Another key component is the centre’s exhaust gas boiler, which will be involved in one of the first research projects.

“Energy efficiency is one of the greatest challenges facing the industry today, but also one of the greatest opportunities for competitive gains,” says Niclas Dahl, Alfa Laval Market Unit Manager, Energy. “Here at the centre we can explore the interaction between components – within and even across process lines – in a controlled and consistent manner. This will speed up the development of more energy-efficient equipment and new energy-saving techniques.”

For the city of Aalborg, the start of operations at the centre has meant an immediate energy bonus. The power generated by its 2 MW engine is fed into the local grid, while the facility’s excess heat is made available for district heating.

A focus on shared priorities
The importance of environmental compliance and energy efficiency to marine customers could be seen in the topics of the guest speakers who participated in the inauguration. Jasper Boessenkool, Head of Strategic R&D, Maersk Maritime Technology at A.P. Moller Maersk A/S, emphasized the need for new technology in securing environmental and climate-friendly shipping. Tamio Kawashima, Managing Director of Monohakobi Technology Institute (MTI), a subsidiary company of NYK Line, discussed the Asian R&D movement to meet the 0.5% global SOX cap. And Thomas S. Knudsen, President, MAN Diesel & Turbo, Denmark, explored the relationship between saving energy today and preparing for the fuels of the future.

These were also the topics of lively conversation in the centre’s exhibition area. During the inauguration, visitors had the opportunity to discuss these issues, as well as service offerings, in greater depth with the Alfa Laval experts on hand.

“Our work is done in a constant dialogue with our customers, and it’s their challenges we have to meet from a multiple of perspectives,” says Peter Leifland. “Owners, operators yards – each have their own issues to resolve, and we have the depth and breadth to act as their partner, rather than just a supplier.”

Unmatched resources, greater possibilities
With the centre in operation, Alfa Laval’s work in meeting customer challenges can intensify. As the start button was pushed at the inauguration ceremony, more than the centre itself was put in motion.  “With the centre now in full swing, we have the possibility to speed up our innovation processes and take R&D to a new level." explains Lars Skytte Jørgensen. “It’s a combination that will bring new benefits and greater peace of mind to marine customers in the years to come.”

In addition, the centre will allow Alfa Laval to step up its training activities, adding Aalborg to existing training sites in Stockholm, Manila and Shanghai. Beyond in-depth training for Alfa Laval sales and service employees, the centre will provide a range of external training options.

In future, ship owners and operators will be able to send engineers and technical supervisors to the centre for hands-on training in new technologies and Alfa Laval products, as well as service training aimed at minimizing maintenance-related operating costs. For shipbuilders, there will also be training in the sizing and configuration of equipment for maximum economy, as well as the impact of design choices on service possibilities and the equipment’s daily use. More about these opportunities will be revealed in the months to come.

The launch of a new era
As well as looking ahead, Alfa Laval can now look back on a very successful inauguration event. The diversity of those attending, who included ship owners, ship operators, shipyards, key marine industry figures, university representatives and special interest groups, was an indication of the enthusiasm surrounding the Alfa Laval Test & Training Centre.

While the focus was on the centre itself, these groups made full use of the opportunity to mingle and exchange ideas. In addition, they were treated to a specially composed musical work entitled “The Machine”. Performed on instruments made from key equipment components produced in Aalborg, the piece was a tip of the hat to the long history of the site.