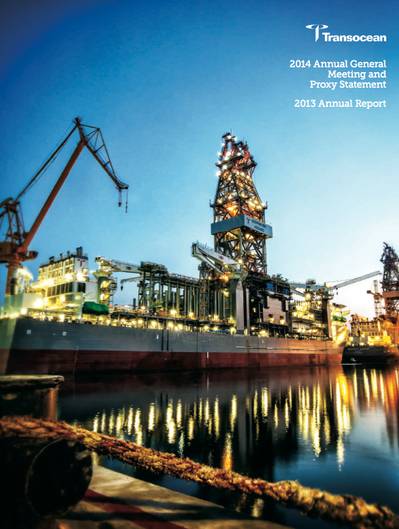 In a letter to shareholders chairman, Ian C. Strachan and Steven L. Newman, president and CEO, set out a summary of offshore drilling specialist Transocean's 2013 operations, excerpted as follows:

• Revenue and Backlog
Full year 2013 net income attributable to controlling interest was $1.4 billion on total revenues of $9.5 billion, increases versus 2012. During the year we added approximately $7.9 billion in backlog, including a five-year contract with Chevron for the newbuild ultra-deepwater drillship, Deepwater Conqueror, to be delivered in the second quarter of 2016. Our industry-leading backlog of over $27 billion provides the Company with a solid foundation to weather what we expect to be temporarily challenging market conditions resulting primarily from deferred customer demand.

• Operations
We continued to take comprehensive actions to improve revenue efficiency, achieving results in-line with and exceeding our 2013 target of 93 percent in the second and third quarters of the year, respectively. Unfortunately, our performance in the first and fourth quarters was disappointing due primarily to widespread vendor quality problems affecting critical fasteners used by the industry and continued challenges with subsea equipment on certain ultra-deepwater rigs. This inconsistent performance resulted in a year-on-year revenue efficiency decline to 91.7 percent from 93.0 percent in 2012.

• Dividend
In 2013 shareholders approved a dividend of $2.24 per share, representing one of the industry’s largest yields and highest implied pay-out ratios. Our Board will recommend that shareholders approve a $3.00 per share dividend at the 2014 Annual General Meeting (AGM), an approximately 34 percent increase. In the context of our balanced capital allocation strategy, we remain committed to returning excess cash to our shareholders.

• Competitiveness and Financial Flexibility
We committed to narrowing the margin differential between Transocean and our comparable peers by the end of 2015 through the implementation of onshore and offshore efficiency improvement initiatives. These initiatives are already yielding a more focused organization that delivers the highest level of support to the Company’s rig operations without compromising safety, operational integrity or customer service.

By almost any measure, 2013 was an exceptionally productive year for Transocean, and progress continues into 2014. While significant strides have been made, there remains much more work to do for the Company to reach its full potential. Our challenge is that much greater given the cyclical pause in which the offshore drilling industry now finds itself.