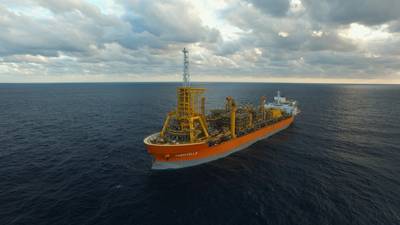 Shell E&P Offshore Services B.V. will exercise its right under the charter agreement to purchase the floating production storage and offloading vessel (FPSO) Turritella, enabling a Shell affiliate to assume operatorship of the Gulf of Mexico ultra-deepwater Stones development in its entirety.

The company selling the FPSO is a joint-venture (JV) owned by SBM Offshore with 55 percent interest, Mitsubishi Corporation with 30 percent interest and Nippon Yusen Kabushiki Kaisha (NYK Line) with 15 percent interest. The transaction comprises a total cash consideration to the JV of approximately $1 billion.
The transaction is expected to close in early 2018.
FPSO Turritella is the deepest FPSO development in the world and has a turret with a disconnectable buoy allowing it to weathervane in normal conditions and disconnect from the FPSO upon the approach of a hurricane.
The FPSO has been on hire since September 2, 2016 and forms an early phase in Shell's Stones development in the Gulf of Mexico. The Stones development is located in 2,896 meters of water approximately 320 kilometers offshore Louisiana in the Walker Ridge area.