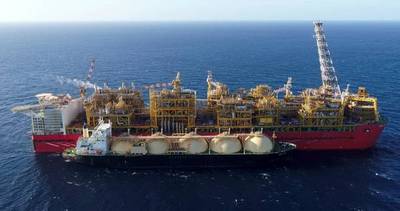 An LNG tanker next to the Prelude FLNG facility - File Photo: Shell

This comes just a week after Shell said that Prelude would resume loading cargoes after production had been suspended for nearly a year following an electrical trip.

The facility loaded its first cargo since coming back online on Jan. 8 onto the LNG tanker Symphonic Breeze which delivered its shipment into Japan on Monday.

The tanker was then bound for the Prelude facility again where it was initially estimated to arrive on Feb. 7 but changed its destination to Singapore on Monday where it is expected to arrive on Jan. 24, according to Rebecca Chia, analyst at data intelligence firm Kpler.

A second LNG tanker, the Gaslog Glasgow, arrived offshore the Prelude area on Jan. 12 and had originally signaled to load from the facility on Jan. 21, she added.

"However, after circling in the area for three days, she diverted ...and is currently headed towards the Cape of Good Hope," Chia said, adding that the tanker is signaling the Punta Europa LNG plant in Equatorial Guinea as load point.

Shiptracking data from Refinitiv also showed the changes in the vessels' destinations.

It is not clear why the ships changed their destinations from Prelude though ships are occasionally rerouted by their charterers.