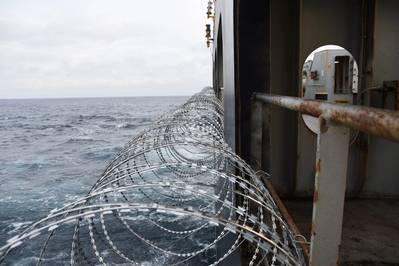 The UN Security Council last week called for greater action to prevent piracy in the Gulf of Guinea, a region posing significant danger for commercial shipping as a hotbed for maritime kidnappings and armed robbery at sea.

The council unanimously adopted Resolution 2634 (2022), which calls upon member states in the region to criminalize piracy and armed robbery at sea under their domestic laws, and to investigate, prosecute or extradite, in accordance with applicable international law, perpetrators of such crimes, as well as those who incite, finance or intentionally facilitate them.

The council urged member states in the region to take prompt action, at national and regional levels, with the support of the international community, when requested by the state concerned.

The council also encouraged bilateral and multilateral partners to provide adequate legal and operational support, and encouraged regional organizations, including the African Union, the Economic Community of Central African States (ECCAS), the Economic Community of West African States (ECOWAS) and the Gulf of Guinea Commission, among others, to enhance subregional, regional and international cooperation on maritime safety and security in the Gulf of Guinea and to further operationalize the Yaoundé architecture.

The resolution was co-sponsored by Ghana and Norway, which both said that piracy posed international risks.

Ghana's ambassador to the United Nations Harold Adlai Agyeman, noted it had been 10 years since the Council adopted its last resolution on maritime piracy and armed robbery in the Gulf of Guinea [resolution 2039 (2012)]. Today, the region remains a global hotspot for piracy, which in turn poses a challenge to the entire world.

Citing piracy’s deep ties to terrorism and the troubling return of coups d’états in the region, Agyeman said the new text builds on various existing frameworks, including the Yaoundé Code of Conduct, and requests the Secretary-General to report to the Council on current efforts being undertaken to combat such crimes.

Recounting the negotiation process, he said talks began in early January, after which bilateral discussions were held to address all delegations’ concerns in an open and transparent manner. However, the adoption was then deferred due to concerns raised by one delegation related to references to the 1982 United Nations Convention on the Law of the Sea in preambular paragraph 3. Efforts were taken to ensure that the text was acceptable to all, and delegates ultimately demonstrated the necessary flexibility to ensure the resolution could be adopted by consensus Specifically, some language was repositioned to make clear that the resolution’s provisions apply only to the situation in the Gulf of Guinea and not to other situations.

Norway's Ambassador to the UN Mona Juul noted that every day more than 1,000 ships crisscross the Gulf of Guinea, and that piracy costs coastal States some $2 billion a year. The Gulf of Guinea remains the most dangerous place in the world for ships, seafarers and maritime trade. Against that backdrop, the resolution aims to increase security. She also observed that it reaffirms that the Law of the Sea Convention sets out the legal global framework on the issue.