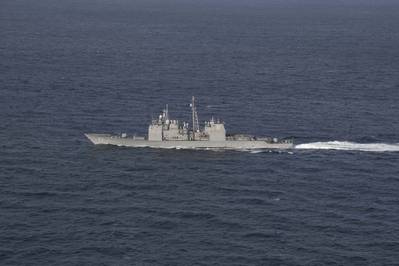 U.S. commercial ships including oil tankers sailing through key Middle East waterways could be targeted by Iran in one of the threats to U.S. interests posed by Tehran, the U.S. Maritime Administration said in an advisory.

The U.S. military said this week that a number of B-52 bombers would be part of additional forces being sent to the Middle East to counter what the Trump administration calls "clear indications" of threats from Iran to U.S. forces there. The Islamic Republic has dismissed the U.S. contention of a threat as "fake intelligence".

In the advisory posted on Thursday, the U.S. Maritime Administration (MARAD) said that since early May there had been an increased possibility of Iran or its regional proxies taking action against U.S. and partner interests.

These included, MARAD said, oil production infrastructure, after Tehran threatened to close the vital Strait of Hormuz chokepoint through which about one third of the world's seaborne crude exports flow.

"Iran or its proxies could respond by targeting commercial vessels, including oil tankers, or U.S. military vessels in the Red Sea, Bab-el-Mandeb Strait, or the Persian Gulf," MARAD said.

Millions of barrels of oil pass daily through the various bottlenecks from Middle East oil producers to markets across the globe.

Tensions have risen between Tehran and Washington since the Trump administration withdrew a year ago from a 2015 international nuclear deal with Iran and began ratcheting up sanctions to throttle Tehran's economy.

Vice Admiral Jim Malloy, commander of the U.S. Navy's Bahrain-based Fifth Fleet, told Reuters on Thursday that its forces were on a heightened state of readiness, although the U.S. military was not seeking or preparing for war with Iran.

MARAD added that U.S.-flagged ships were encouraged to contact the Fifth Fleet - which is tasked with protecting commercial shipping in the area - at least two days before sailing through the Strait of Hormuz.

Washington further tightened sanctions on Iran this month - eliminating waivers that had allowed some countries to buy its oil - with a goal of reducing Tehran's crude exports to zero.

Iran has responded by scaling back some curbs on its nuclear programme concerning material stockpiles though it remains compliant with commitments to restrict its uranium enrichment activity.