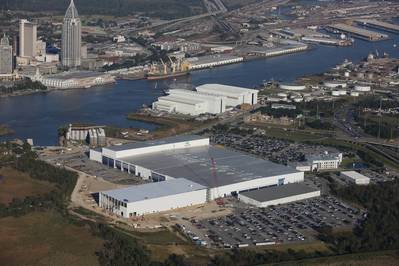 A recent aerial image of most of Austal USA's Mobile, Ala. facilities, including its new steel panel line addition. (Photo: Austal USA)

Mobile, Ala. shipbuilder Austal USA has been awarded a contract to build up to 11 medium-endurance Offshore Patrol Cutters (OPC) for the U.S. Coast Guard.

The initial $208.26 million award supports detail design and long lead-time material for one OPC, with options for production of up to 10 additional vessels, the Coast Guard announced on Thursday. The deal could be worth up to $3.33 billion if all options are exercised.

The 11 Heritage class cutters, designated as Stage 2 of the overall OPC program, follow the first four OPCs being built by Florida shipbuilder Eastern Shipbuilding Group. Eastern’s initial OPC award in 2016 was for ships 1-11, but the Coast Guard later modified the contract after Hurricane Michael landed a direct hit on Eastern’s shipyard in 2018.

In 2019, the Coast Guard revised its OPC acquisition strategy and opened a competitive bid process for OPCs five and through 15.

The Coast Guard released a request for proposal January 29, 2021, for OPC Stage 2 detail design and production, seeking proposals that maintained commonality with earlier OPCs in areas such as the hull and propulsion systems, but with flexibility to implement new design elements that benefit lifecycle cost, production and operational efficiency and performance.

Austal USA, which recently opened a new $100 million facility that gives it steel shipbuilding capabilities, beat out Eastern and other known bidders such as Bollinger Shipyards and Huntington Ingalls Industries to secure the Stage 2 OPC builds. Construction is expected to start in 2023, Austal said.

Austal USA president Rusty Murdaugh said, “This contract award is the result of our continued investment in our people and our facilities. We are thrilled for the opportunities this will bring to our local community and our tremendous supplier base, as this program will provide our shipbuilding team the stability for continued growth.”

“The Coast Guard’s decision to select Austal USA to build its second round of Offshore Patrol Cutters highlights the world-class workforce and proven track record of the Mobile shipyard,” said U.S. Senator Richard Shelby (R-Ala.). “This contract speaks to the reliability and strength of Austal employees along the Gulf Coast, as well as their ability to deliver.  This is excellent news for the future of our Coast Guard and for shipbuilding in Alabama.  I look forward to the positive impact that Austal and Mobile have on the security of our nation.”

U.S. Senator Marco Rubio (R.-Fla.) blasted the Coast Guard’s decision to move the build program out of Florida. “Today’s decision is short-sighted,” Rubio said. “When I visited Eastern Shipbuilding last year, I saw firsthand their commitment to building reliable, state-of-the-art ships. They have proven they can do the job and do it well. This decision will cost taxpayers more money and slow down the delivery of these critical vessels.”

The Coast Guard intends to commission up to 25 Heritage class OPCs over the next two decades. The cutters, which are capable of deploying independently or as part of task groups, will be used for missions such as law enforcement, drug and migrant interdiction and search and rescue operations. Each will have a range of 10,200 nautical miles at 14 knots and a 60-day endurance period.

“The offshore patrol cutter is absolutely vital to Coast Guard mission excellence as we recapitalize our legacy medium endurance cutters, some of which are more than 50 years old,” said Adm. Linda Fagan, commandant of the Coast Guard. “The OPCs are the ships our crews need to protect our national security, maritime safety and economic prosperity. I look forward to the new cutters joining our fleet.” 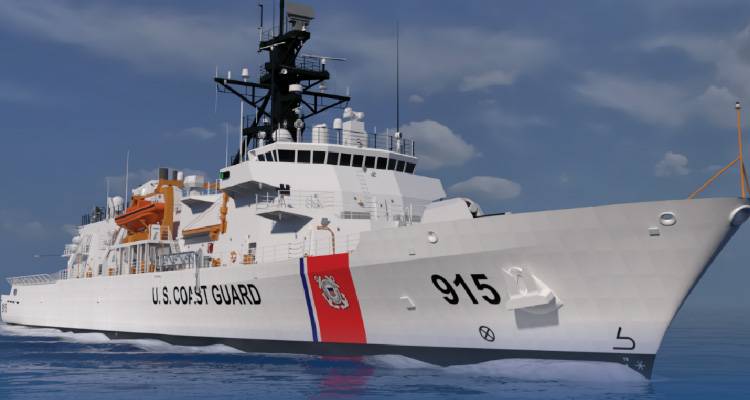