The Coast Guard’s 353-ton, 154-foot fast response cutter (WPC) is capable of deploying independently to conduct missions that include port, waterways and coastal security; fishery patrols; search and rescue; and national defense. The service plans to build 64 of them to replace the 110-foot Island class patrol boats. The FRC has a range of 2,500 miles, but the endurance of the 24 crewmembers is normally limited to about five days based on the quantity of provisions carried. Both the 110s and 154s have about the same speed and range, but the FRC has much better seakeeping qualities, which affects crew endurance.

Named after Coast Guard enlisted heroes, the FRCs are replacing the aging Island-class 110-foot patrol boats. Built by Bollinger Shipyards of Lockport, La., the Coast Guard commissioned its 48th FRC, the USCGC Pablo Valent (WPC 1148) on May 11, 2022, in St. Petersburg, Florida.
In some respects, the FRC is closer to a 210-foot medium endurance cutter (MEC) mission set than a 110-foot patrol boat (WPB) the FRCs are replacing. However, the FRCs don’t have the endurance that the MECs do.

In the Coast Guard’s 14th District, which covers a huge amount of the Pacific Ocean, three FRCs are based at Guam and three in Honolulu. These cutters are now conducting distant patrols that previously required larger ships.

“Our mission is different from other FRCs because we don’t have a lot of ports we can pull into as we transit to our operating areas,” said Lt. j.g. Joseph Fox, executive officer of USCGC Joseph Gerczak (WPC 1126), assigned to Sector Honolulu. “If an FRC back in CONUS goes north for an expeditionary operation to the Arctic, for example, they can stop along the way. When we go to Tahiti or American Samoa, there’s nothing in between. We’ll usually travel with a ‘black hull’ buoy tender in case we need to take on fuel at sea. But we have to be very careful with our fuel, and how we run our engines, and balance the need to have enough provisions for the trip and arrive safety with at least 20 percent fuel on board with the need to get down there so we can get to work.”

The difference in distance from Honolulu to American Samoa and to Tahiti in French Polynesia is about 2000 to 3000 nautical miles, with Tahiti being further away. In 2019, Joseph Gerczak made the first unsupported transit to American Samoa as a proof of concept, and more recently to Tahiti. 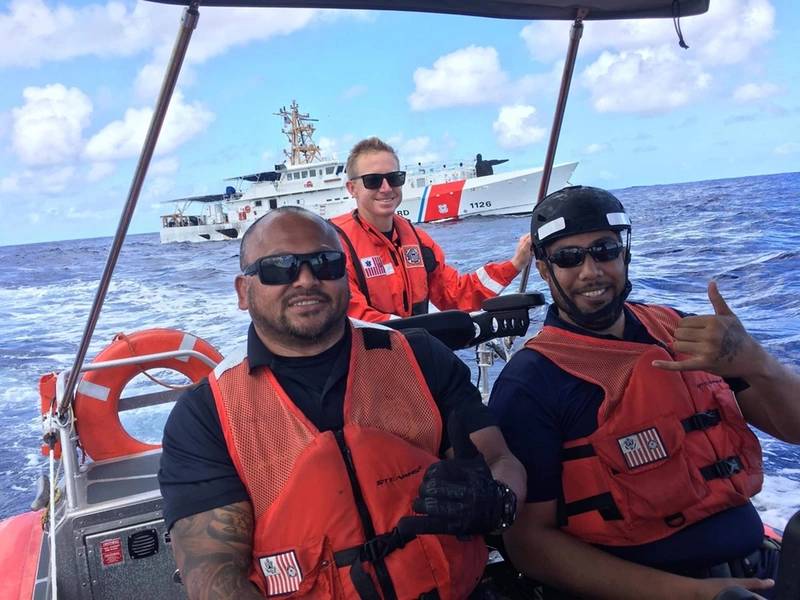 “The Coast Guard is pushing the boundaries a little bit to see how far we can really go,” said Lt. Joseph Blinsky, the Joseph Gerczak’s commanding officer. “That's why we were the proof of concept to go to French Polynesia. We proved that it could be done unsupported.” To ensure a safe transit, the Joseph Gerczak operated with a 225-foot buoy tender (WLB) nearby in case there was a problem.

“We were the first FRC to go down there, and we arrived at a comfortable fuel level, but that’s relative. We did program in a safety buffer. But there isn’t much margin if there was a problem. It’s definitely a matter of weather and sea state permitting and nothing going wrong. Blinsky said.
If necessary, the FRC could take on fuel from the WLB. “FRCs have refueled from tenders before. We haven’t conducted a RAS with an WLB, but we have done an astern refueling with a WMSL,” Blinsky said.

Normally FRCs have a five-day endurance, but the longer transit required special preparations. “Our CSs (culinary specialists) did a great job allocating and maximizing our storage,” said Fox. “We had extra freezers and reefers on the bridge and out of the mezzanine deck.”

The FRCs are powered by a pair of 5,800 SHP 20-cylinder MTU Series 4000 M93L diesel engines. They’re called fast response cutters for a reason.

Even though FRCs have good speed—up to 28 knots--the Joseph Gerczak’s Chief Engineer, MK2 Scott Sabatini, said the cutter sailed to Tahiti at about ten knots to save fuel.

“When we’re going somewhere fast, we like to run at 1,800 rpm,” Sabitini said. “At that speed we’re burning about 500 gallons per hour and our fuel capacity is about 16,000 gallons. So, it dwindles pretty quickly. For a transit this long, we need to burn closer to 50 gallons per hour.”

“Our 50 gallons-per-hour fuel consumption only works if we have both main engines running optimally at 900 rpm. We can’t maintain speed and be fuel efficient on a single engine. And we can’t run on just one engine at full bore, because it will exponentially burn more fuel,” Blinsky said. “We base all of our calculations off of burn rate per hour, not speed.”

The sea state was such that it made the transit slower, and also made a refueling at sea (RAS) a more difficult evolution. “We wanted to avoid a RAS if possible,” said Blinsky.

Sabatini said that the lower speed poses some other problems for the engines. “The diesels are really designed to operate at higher RPMs. When we were going for a week to ten days at a relatively slow speed, the carbon isn’t getting blown out. So, I was worried about that build up, and concerned about replacing injectors at a high rate than normal.”

FRC maintenance support is centralized, and managed from Baltimore, where parts are stored. “It can takes weeks to get to Hawaii, and longer to get to Guam, American Samoa or Tahiti,” Sabatini said.

There were other considerations in planning the expeditionary patrols. Fox said personnel injuries or illnesses were a major concern. Unlike the WLBs and WMSLs, the FRCs do not have an independent duty corpsman on board, and the risk has to be considered because there was no higher level of care readily available. “If someone got hurt on one of these patrols, how are we going to get them to higher level medical care? Many of these islands don't have the level of medical care we might need. If something goes wrong, we might need a tender or a WMSL nearby with a corpsman and a sickbay.”

COVID made the patrols even more complicated. Crews often had to stay on board when in port. Getting repair parts and provisions to the ship more difficult and time consuming.

“We can plan these trips in detail, but each unexpected deviation from that plan comes with a set of unknowns,” said Blinsky.

“When we go downrange, we’re conducting a presence mission and also helping our partners with the uniform enforcement of the Western and Central Pacific Fisheries Committee agreement, and monitoring the fishing activities in the various nations’ exclusive economic zones (EEZs). COVID permitting, we can conduct inspections and ensure the fishing vessels are who they say they are, catching only what they’re allowed to catch, and have the proper preventative equipment to ensure against accidental catches of sea birds and turtles,” Blinsky said. “In the U.S. EEZ we have authority and jurisdiction. In other nation EEZs we’ll take ship riders with us who give us that authority.”

Deputy Sector Commander for Sector Honolulu Cmdr. Aja Kirksey said the option of sending an FRC with a WLB together as a surface action unit (SAG) has proven to be successful. But these long deployments have risk, and we shouldn’t assume that because we’ve done it that we should continue to do them as the norm in the future.”

“As good as the FRC is, it isn’t the optimal asset for this area of operations,” she said. “We've been lucky because we’ve done really good operational planning, and we put a lot of attention on the success of this mission. But we’re exceeding the design and operational intent of what this what this asset was created to do.”

While the FRC and WLB make a good team, the consensus is that two FRCs together don’t have the excess storage or medical support that the 225 can provide. Kirksey said a fourth FRC for Sector Honolulu would be helpful, but it’s not in the Coast Guard’s plans.

Kirksey said the 418-foot, 4,500-ton National Security Cutters (WMSLs) and WLBs, as well as the new 4,500-ton, 360-foot Offshore Patrol Cutters (OPCs), have better endurance and seakeeping. She’s looking forward to when the OPCs starting joining the fleet in 2025.

“Not only will the OPC be better suited for the long missions, their ability to perform missions now conducted by the WMSLs (such as Bering Sea fisheries patrols) will free them up to come out here to District 14, where they are ideal for the expeditionary patrols.”

But, Kirksey said, in the absence of the perfect asset, the FRCs are the right asset for the job right now. “We’re making it work.” 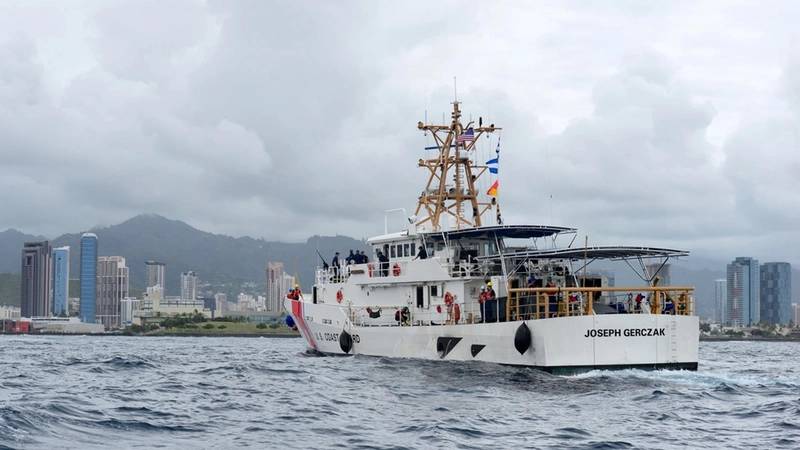 The crew of the Coast Guard Cutter Joseph Gerczak (WPC 1126) arrive to their new homeport of Honolulu Feb. 4, 2018, following a 42-day transit from Key West, Florida, where the cutter was delivered. The Gerczak is the second of three 154-foot Fast Response cutters to arrive to Hawaii. (U.S. Coast Guard photo by Chief Petty Officer Sara Muir/Released)