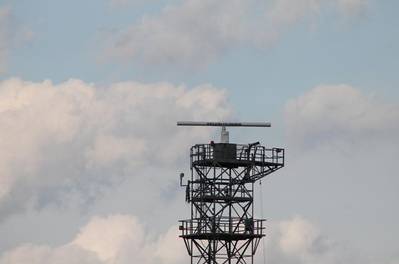 Navigation and security surveillance systems company Kelvin Hughes announced it has been contracted to supply two of its SBS-900-2 SharpEye radar systems for the Porto de Vitória in Brazil. The equipment will be provided through Spain’s Indra.
The SBS-900-2 is from the ‘advanced’ radar family of the Kelvin Hughes Shore Based Sensor radar range. The radar system consists of a single X-Band SharpEye radar transceiver mounted in an environmentally sealed enclosure on a mast close to the antenna. The antenna itself is also an advanced, high specification design with a span of over 6 meters and has a switchable polarization capability between horizontal and vertical beamwidth.
The SBS radar system will be fully remote controlled and has been designed for continuous operation. Capable of achieving high range accuracy and target discrimination in range and azimuth, the SBS system can also adapt automatically to changes in the weather and environmental conditions without the need for any operator intervention, the manufacturer said.
Kelvin Hughes’ SharpEye radar technology features patented pulse sequences and Doppler processing, High Pulse Compression Ratio and Frequency Diversity. Combined with the antenna system that can switch the polarization of the RF energy produced, the SharpEye Doppler radar system is able to see through the clutter (heavy rain and sea waves) leaving a clear radar picture which meets surveillance requirements of a Vessel Traffic Management Service (VTMS) by providing full situational awareness.
The radars will help to increase maritime safety and increase the efficiency of port operations by facilitating the monitoring and management of vessel traffic in the area and the provision of data to the port’s surrounding municipalities.
Paul Mariner, Kelvin Hughes’ Regional Sales Manager, commented, “We’re delighted to be working with Indra again following the recent award of four SBS-700 radar systems at the Port of Southampton, U.K., one of the busiest deep-water ports in the world. Winning this new contract to help protect the Port of Vitória is further evidence of the superior capability and cost-effectiveness of our Shore Based Sensor radar systems.”