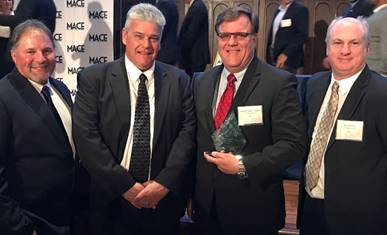 Buck Younger, Vice President of Engineering with VT Halter Marine, was named the Marine Engineer/Naval Architect of the Year by the Mobile Area Council of Engineers (MACE).

In April 2019, VT Halter Marine announced that the U.S. Department of the Navy awarded the company as the prime contractor of a $745,940,860 fixed-price incentive-firm contract for the detail design and construction of the U.S. Coast Guard’s new Polar Security Cutter (PSC). The PSC program is a multi-year initiative by the U.S. Coast Guard to acquire up to three multi-mission PSCs to recapitalize its aging fleet of heavy icebreakers. The first ship delivery is scheduled to occur in 2024.

“In his role here at VT Halter Marine, Buck was instrumental in supporting the company’s winning bid for the U.S. Coast Guard’s Polar Security Cutter,” said Ron Baczkowski, VT Halter Marine President and CEO. “For three years, he personally directed every engineering aspect of the bid. I’m very proud of the work Buck has done, and it is definitely a well-deserved award for him to be named the Marine Engineer/Naval Architect of the Year by MACE.”

Younger oversaw the hull form tank testing and the associated ice breaking model testing and had a direct hand in evaluating and selecting the program’s major sub-contractors. His marine industry expertise proved invaluable during the design trade off studies, which he managed through implementation.

He has worked in the marine industry for 39 years and has owned his own marine designers and consulting company. Younger has been a member of the Society of Naval Architects and Marine Engineers since 1980. He is active in the National Shipbuilding Research Program where he is a member of the ship design and materials technology panel. He has also been a part of the American Bureau of Shipbuilding Rules Committee for Navy Vessel Rules and High Speed Naval Crafts.