Posted to Maritime Reporter (by Sennebogen) on August 7, 2022 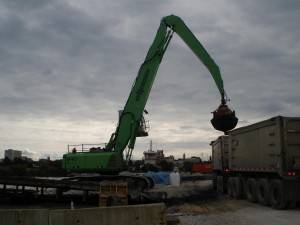 The hydraulics on the SENNEBOGEN 840 are so responsive and smooth that none of the dredged material touches the ground.

Charlotte, NC - The towering green booms of SENNEBOGEN material handlers have long been a familiar sight in American port facilities and barge docks. In more recent years, though, the same popular machines have taken an expanded role on our waterways. Purpose-built to lift and swing large loads, SENNEBOGEN equipment has successfully taken its place in dredging and shoreline construction applications.

Often seen as an efficient replacement for traditional rope cranes and excavators, material handlers are also put to work alongside other specialized equipment in the fleet. Robert Gezon, President of White Lake Dock & Dredge, Inc., explains: “Our SENNEBOGEN machines are part of a readily-transportable fleet of specialized, production matched, marine and shore-side equipment.”

A team player in remediation projects
Based on the Great Lakes in western Michigan, Gezon describes his firm as “a small company with 20 years of experience. We specialize in environmental sediment remediation dredging and subaqueous capping projects as well as all facets of marine construction and waterfront development. We work in some of the most difficult to access and environmentally sensitive locations in the United States and Canada.”

For most projects, Gezon pairs its SENNEBOGEN machines with long-reach excavators. The excavators are located on the floating platform and are used for dredging and placing material on a material barge. RTK GPS (Real Time Kinematic GPS) precision dredging ensures absolute precision in the removal of the identified material. The dredged material is brought to shore where a SENNEBOGEN 840 R-HD or 835 R-HD unit equipped with a 2.6 cubic yard clamshell bucket is used to offload the barge. The dredged material is loaded onto waiting trucks to be hauled to a landfill or further processing.

Precise handling for contaminated materials
White Lake trusts the reliability and responsiveness of its SENNEBOGEN 840 R-HD and 835 R-HD purpose-built material handlers to keep its often-sensitive environmental remediation operation running smoothly. Gezon is impressed with the SENNEBOGEN machines’ hydraulics and engineering, which ensure that the handling of potentially harmful contaminated material is accurate, efficient, and exact. “From the dredging on the barge to the loading of the trucks on the shore, the dredged material never touches the ground. We don’t spill a drop.”

“We love their material handling capabilities and elevated cabs. Being able to see into the barges and trucks allows our operators to unload the barges and load trucks much faster and safer without any risk of damage to the equipment.

Stability is key, on shore and off
The requirements for dredging from a floating platform are clearly different from shore-based operations. But Great Lakes Dock & Material, LLC (GLDM), a major dredging and marine construction contractor on the Great Lakes, found again that SENNEBOGEN machines are well suited to the varied tasks. The firm specializes in heavy lifting on the water or at the water’s edge, from building docks and break walls to dredging and environmental remediation projects.

So, when GLDM owner Joseph Bailey and his Senior Project Manager, Mike Russell, went looking for new loading equipment, stability was very much top of mind.

The firm considered several brands of excavators and material handlers, but SENNEBOGEN material handlers stood out. Mike Russell was not surprised. “I had previously managed projects with the SENNEBOGEN 835 R-HD and SENNEBOGEN 840 R-HD in other marine applications. They all have full load capacity through their 360° working radius. Being on barges or improvised platforms, we felt this capability was essential for our machines to have.”
All SENNEBOGEN machines, on wheels or tracks, are built on a square footprint, with the swing bearing centered on the undercarriage. With 360o load ratings, the risk of tipping is vastly reduced. This not only makes for a safer worksite, but it also gives operators greater confidence when they’re moving loads, allowing faster, more efficient cycle times.

More productivity, pound for pound
With their combination of 360° lifting capacity, stability, long reach, and portability, the SENNEBOGEN machines have proven to be an excellent match to the unique needs of GLDM. “Pound for pound, they’re a pretty productive machine,” Russell says. He notes that excavators are often more common in this type of work, especially for their digging ability. The purpose-built SENNEBOGENs won out at GLDM on a few key counts.

“It’s kind of a compromise with an excavator,” he admits. “The excavator is not for lifting significant loads high, but it goes deep. When you work on the ground, you can bring the truck right next to you, so you don’t really care how much you have to reach out.”

“On“On a barge, your work is often in front of you and the material barge is at the side. You want as much reach as you can. We aren’t normally making big stockpiles, but you want to spread the material as far as you can so you’re working at maximum radius most of the time. Barges require the deck loading to be relatively evenly distributed. This prevents overstressing structural members as well as aiding in stability.”

The right equipment for the purpose
“And when you’re dredging, a critical component is how far down from the barge deck you can reach. The arch in the banana boom allows us to reach over the coaming of the material barges alongside. It can also reach deeper depths than the normal straight boom and stick configuration. It can work over the coaming, reach down 20 ft. (6 m) below the tracks and lift it up. An excavator doesn’t have that lift above the track level capability (at full radius) and the SENNEBOGEN works fast.”

GLDM added a “new to them” crawler-mounted 835 R-HD to its fleet in late 2018, then a larger new 840 R-HD about six months later. While the two machines are assigned according to the specific needs and scale of current projects, both machines perform the same basic duties: primarily offloading dredge spoils or stone from material barges and, in some projects, actual dredging, placing of stone or construction-related activities. Crawler-mounted undercarriages provide capabilities in unimproved sites as well as safety benefits when walking machines onto and off of barges.

Mobility = versatility in heavy lift
“Mobility” wasn’t top of mind when Chip Broussard decided to acquire his new SENNEBOGEN 875 R-HD material handler. Chip is a third-generation member and vice-president of the family-owned Broussard Brothers, one of the leading marine and land construction contractors on the Gulf Coast.

His real goal was to upgrade the lift capacity of his fleet to compete for upcoming contracts for seawall restoration work. With miles of Louisiana coastline requiring thousands of tons of rock to be loaded and placed, these jobs would be a welcome addition to the Broussards’ long-term plans. But the mobility of the machine became a key factor when they considered the flexibility the 875 would offer for working offshore as well as on the shoreline.

“We had seen similar machines in the area,” Broussard says, “but nothing of this size. And the other machines have to be welded down to the barge. At times we might be doing rock work and we want a crane on the ground; then we pick up another job and want to put the SENNEBOGEN on the barge. Because of its versatility, we didn’t have to get another barge! We just swap the equipment to get the right piece in the right place.”

Fine control, fast cycles
“Some of these rock jobs, the stones are very large, more than the clamshell can handle, so we have the grapple for that.” In shoreline restoration work, where fine control is required for precise placement of man-sized boulders, Broussard is quite confident that the machine can maintain his target of 400 to 500 tons per hour. The fast cycle times of the 875 brought an unexpected bonus in dredging applications. We were loading some material barges, one that can hold up to 350 tons. We loaded it in about 20 minutes!” In that application, with short, easy swing cycles, he estimates that the 875 can move as much as 600 tons per hour. “We just increased our capacity by a factor of three or four times!”

Cost savings for competitive bidding
With its Green Hybrid energy recovery system, the efficiency of the 875 is figuring prominently in Broussard’s ability to bid competitively. “I’m anticipating that we’ll run on 8 to 10 gallons of diesel per hour: about the same gph as a large excavator or our cable crane. We usually bid so many gallons of fuel to do the project; now our fuel cost will be cut in half, or even less.”

“There’s a lot of people chasing this business,” Broussard says. “But I don’t know that they’re going to get the efficiency or the fuel saving that we get. An excavator is not built for this kind of work. You have to add a counterweight to it, and then make other modifications. But this 875 is purpose-built for the kind of material handling we do here.”