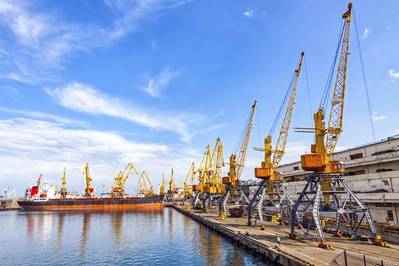 A potential invasion of Ukraine by neighboring Russia would be felt across a number of markets, from wheat and energy prices and the region's sovereign dollar bonds to safe have assets.

Below are four charts showing where a potential escalation of tensions could be felt across global markets:

Safe havens
Inflation at multi-decade highs and impending interest rate rises have made for a bad month for bond markets, but an outright Russia-Ukraine conflict could change that.

Two-year U.S. Treasury yields have seen the biggest monthly jump since 2016 and 10-year rates appeared headed for the key 2% level. In Germany, 10-year yields rose above 0% for the first time since 2019.

A major risk event usually sees investors rushing back to bonds, which represent the safest assets on planet and this time may not be different, even if a Russian invasion of Ukraine risks further fanning oil prices -- and therefore inflation.

"Clearly if the Ukraine story was to go wrong there would be quite a significant bid for Treasuries, and this notion of the 10-year getting to 2% would be put on hold," said Padhraic Garvey, regional head of research, Americas at ING.

Other safe-havens include gold, already at two-month peaks as well as the yen.

Grains and wheat
Any interruption to the flow of grain out of the Black Sea region is likely to have a major impact on prices and add further fuel to food inflation at a time when its affordability is a major concern across the globe following the economic damage caused by the COVID-19 pandemic.

Four major exporters - Ukraine, Russia, Kazakhstan and Romania - ship grain from ports in the Black Sea which could face disruptions from any military action or sanctions.

"Geopolitical risks have risen in recent months in the Black Sea region, which could influence wheat prices ahead," said Dominic Schnider, strategist at UBS.

Natural gas and oil
Energy markets are likely to be hit if tensions turn into conflict. Europe relies on Russia for around 35% of its natural gas, mostly coming through pipelines which cross Belarus and Poland to Germany, Nord Stream 1 going directly to Germany, and others through Ukraine.

In 2020 volumes of gas from Russia to Europe fell after lockdowns suppressed demand and did not recover fully last year when consumption surged, helping to send prices to record highs.

As part of possible sanctions in the case Russia invaded Ukraine, Germany has said it could halt https://www.reuters.com/world/europe/germany-signals-it-could-halt-gas-pipeline-if-russia-invades-ukraine-2022-01-18 the new Nord Stream 2 gas pipeline from Russia that was expected to increase gas imports to the bloc but also underlines Europe's energy dependence on Moscow.

Oil markets could also be affected. JPMorgan said the tensions risked a "material spike" in oil prices and noted that a rise to $150 a barrel would reduce global GDP growth to just 0.9% annualized in the first half of the year, while more than doubling inflation to 7.2%.

Regional dollar bonds and currencies
Russian and Ukrainian assets will be at the forefront of any markets fallout from potential military action.

Both countries' dollar bonds have underperformed their peers in recent months as investors trimmed exposure amid escalating tensions between Washington and its allies and Moscow.

Ukraine's fixed income markets are chiefly the remit of emerging market investors, while Russia's overall standing on capital markets has shrunk in recent years amid sanctions and geopolitical tensions, somewhat cushioning any threat of contagion through those channels.

However, Russia's rouble and Ukraine's hryvnia have also suffered, making them the worst performing currencies in the emerging markets universe so far this year.

"The events of late 2014 remind us of the liquidity gaps and U.S. dollar hoarding that led to a substantial drop in the rouble at that time," said Turner.