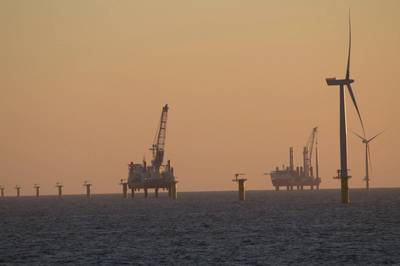 It's no longer news that the U.S. is set to become the next big offshore wind market, with an IEA 2019 report forecasting 40 GW of installed offshore wind capacity in the country by 2040, which will require a $100 billion investment.

To meet this expected growth, both in the fixed-bottom wind farms and the floating wind farms, the U.S. market will require a large amount of wind farm support vessels of various types, with the current fixed-bottom wind turbine installation fleet non-existent, and the foreign-flagged vessels not an option, for the most part. Development of ports required to support the offshore wind construction will need to pick up, too.

When it comes to offshore wind vessels required, there's one thing where the U.S. differs from most other countries - the Jones Act. The Jones Act requires any vessel transporting cargo between U.S. ports to be built and flagged in the U.S.

According to ABS, a leading offshore classification society, for the purposes of the Jones Act, a bottom-founded (fixed) wind turbine foundation is considered a U.S. port.

This might pose an obstacle, as the U.S. currently doesn't have any Jones Act-compliant offshore wind installation vessels, but could also be an opportunity for those who build them first. These will probably be more expensive, but still necessary.

"The construction and maintenance of offshore wind projects call for a combination of expertise that is comparatively new to the U.S. market and requires a variety of specialist support tonnage," ABS said in its U.S. offshore wind report seen by Offshore Engineer, which set to be launched this week.

"The U.S. could build a U.S.-flagged purpose-built Wind Turbine Installation Vessel (WTIV). Having a specialized vessel would lower the number of support vessels. However, a U.S.-built WTIV would be considerably more expensive than a European or Asian built unit due to a lack of specialized manufacturers and suppliers in the U.S.," ABS said in its report evaluating the U.S. offshore wind industry’s readiness to deliver on the 40GW target.

Worth noting, while the country's offshore wind turbine installation fleet is currently non-existent, this is set to change, as Dominion Energy recently set the wheels in motion when it confirmed plans to join a consortium of investors that is building the first U.S. offshore wind installation vessel - called the Charybdis - at Keppel Amfels shipyard in Texas.

The vessel, to be classed by ABS, and for which the keel was laid in December 2020, marking the start of the construction, is expected to enter service in 2023 and is expected to be based out of the Hampton Roads region of Virginia with a U.S. crew.

An option could also be to use a foreign, non-Jones Act installation vessel, however, components from a U.S. port must be transported by a U.S.-built feeder vessel.

The feeder vessel, which may be a jackup vessel, barge, or ship, is brought to the project site, where the foreign Wind Turbine Installation Vessel (WTIV) may lift the components off the feeder vessel onto the foundation without moving. This strategy allows the use of foreign-flagged WTIVs, but it requires additional Jones Act compliant feeder vessels, ABS said. 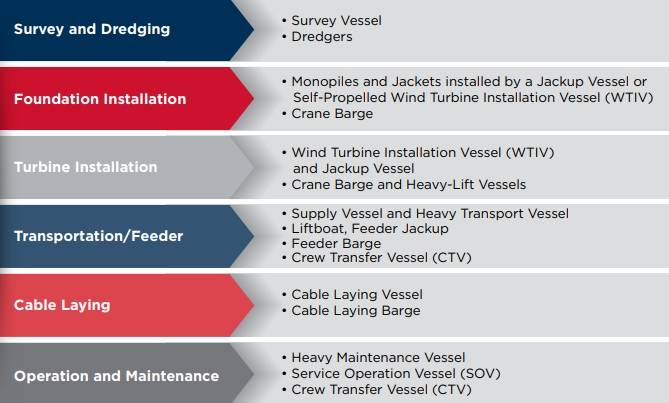 According to ABS, this is where U.S.-flagged jack-ups originally used in the offshore oil and gas industry could come in handy as well, as they could be adapted and utilized for foundation installation.

"This would certainly be a cheaper option than building specialized vessels from scratch; however, installation could take longer, and there would be limits on the water depth and lifting capacity the existing jackups could operate. As the turbine size increases, the existing U.S.-flagged jackups may assist the foundation installation and / or transport the components as feeder vessels," ABS said.

Worth noting, Louisiana-based company 2nd Wind Marine last year said it would design, finance, build and operate two Jones-Act-compliant jack-up vessels aimed at the growing U.S. offshore wind market, however, it is not clear when these vessels might be delivered.

Elsewhere in the U.S. offshore vessel space, the first Jones Act compliant service operation vessel (SOV) to be built at Edison Chouest for Ørsted and Eversource will also be classed by ABS.

When it comes to SOVs, ABS says that the capacity exists within the U.S. shipbuilding sector to construct new assets using existing shipyards to adapt designs and experience from building conventional OSVs.

"Operators may also choose to convert some of the existing idle OSV tonnage by adding modular accommodation, workshop capacity on the cargo deck area, or offshore access gangway," ABS said.

The Charybdis and the Edison Chouest SOV will join the first ABS-classed crew transfer vessel (CTV) in the US, Windserve Odyssey. ABS has also issued approval in principle for a series of wind support vessels, such as WTIVs, SOVs, feeder vessels, and CTVs from U.S. and European designers.

"The demand for vessels to support offshore wind farm installations, maintenance, service, repairs, and crew transfer is increasing. Globally the total number of vessels required will increase by five times in 2025 in comparison with that in 2018," ABS said, adding that it has in the past few years received numerous inquiries from owners and designers, including those from Europe seeking to access the U.S. market.

Apart from the offshore wind vessel-focus, in its report, ABS has identified several East Coast ports that may be suitable for offshore wind use, such as New Bedford in Massachusetts, Tradepoint Atlantic in Maryland, New London and Bridgeport in Connecticut, Port of Providence in Rhode Island, and the newly announced New Jersey Wind Port.

"According to the U.S. Jones Act Compliant Offshore Wind Turbine Installation Vessel Study conducted by GustoMSC, an ideal port would have no restrictions regarding the horizontal clearance and air draft. The Port of New Bedford does not have such restrictions," ABS said.

"The Port of New Bedford in Massachusetts has no air draft limitations and a terminal designed to accommodate offshore wind construction. For entry into port, the WTIV will require passage through an opening no more than 45.7 m wide with vertical sides. To accommodate the Port of New Bedford, the maximum allowable hull width is 42.0 m. The water depth in the channel has been dredged to 8.7 m with the maximum allowable draft at 8.7 m," ABS said in its report.

Commenting on the soon to be launched report, Matt Tremblay, ABS Senior Vice President, Global Offshore said: "ABS is playing a leading role in the development of the U.S. offshore wind industry, supporting the development of specialist tonnage dedicated to operations in U.S. waters and the next generation of floating turbines. As the leading provider of classification services to the global offshore industry, combined with our extensive knowledge of U.S. regulations, ABS is in a unique position to support the development of the U.S. offshore wind industry and this report demonstrates our commitment to that."