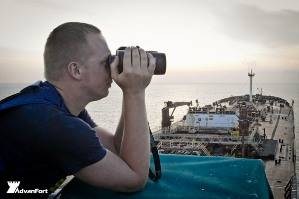 "Key to this process is that the Federal Office of Economics and Export Control (BAFA) does not require a set of documents that is formally 'carved in stone,'” said AdvanFort Vice President for Sales and Business Development Axel Tuetken. “Rather, BAFA is willing to look at the documentation supplied by the PMSCs, offering a certain freedom on how to meet the requirements. That means that every truly professional PMSC can use their in-house knowledge and standards to prove to BAFA that this is the best way to ensure safety on German flagged vessels."

He added, "What is perhaps most important for those of us in the security service field is that the requirements are clear and that also foreign companies have the same opportunity to apply for accreditation. Most documents can be supplied in English language so BAFA has made it an equal playing field for German and non-German companies."

AdvanFort President William H. Watson underscored the importance of Tuetken's observations, adding the U.S. company’s support for the German initiative was due to the fact BAFA’s accreditation principles "will lead to a clear and more transparent view of the security industry working on German-flagged ships operating in High Risk Areas." At the same time, he said, "the process could also separate the 'wheat from the chaff' in terms of which PMSCs are true best-practice practitioners.”

Captain Watson concluded by saying that the maritime leader looked forward to any additional BAFA compliance checks undertaken by the Bundespolizei and noted that AdvanFort's continuing emphasis on training standards have meant on-going and improving standards that have created concern among less-capable PMSCs.