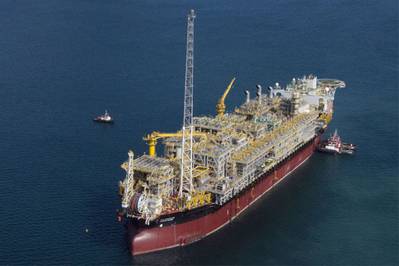 MODEC, Inc. announced today that its FPSO Cidade de Itaguai MV26, operating in the Iracema Norte area of Lula field, in the Pre-Salt layer of Santos Basin offshore Brazil, has achieved First Oil production on July 31, 2015, five months ahead of the schedule anticipated under the contract.
The FPSO is chartered by Tupi B.V., a subsidiary of Petroleo Brasileiro S.A. (Petrobras), under a 20-year lease and operation contract.
Moored 240 kilometers off the coast of Rio de Jeneiro at a water depth of around 2,240 meters, the FPSO is capable of processing  150,000 barrels of oil per day and 280 MM standard cubic feet of gas per day, and has storage capacity of about 1.6 million barrels of crude oil.
This is the 10th FPSO/FSO vessel which MODEC has provided in Brazil, as well as MODEC's fourth FPSO in the Pre-Salt after the FPSO Cidade de Angra dos Reis MV22, the FPSO Cidade de São Paulo MV23 and the FPSO Cidade de Mangaratiba MV 24.
Similar to previous MODEC's FPSOs for Pre-Salt, the FPSO had its process modules assembled, installed and integrated by the company in Brazil. According to MODEC, the completion of the FPSO, which began with the conversion of the VLCC tanker carried out in China, demonstrates its commitment to conform to the Brazilian policy of enhancing local content, involving two module construction sites in the state of Rio de Janeiro and another one in the state of São Paulo.