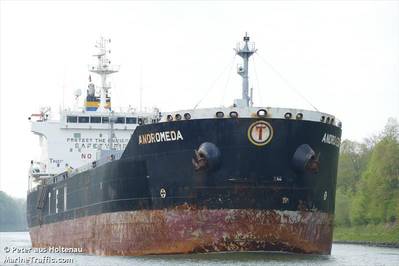 Greenpeace protesters have blocked the entry of a Greek tanker into a southern English port due to its Russian fuel cargo with police making arrests, the green group said on Monday.

Britain and the EU have separately banned Russian-flagged vessels from their ports, with exemptions, after Russia's invasion of Ukraine in what the Kremlin describes as a "special military operation."

The UK has said it will phase out imports of Russian oil by the end of the year, which has meant that foreign-flagged vessels carrying Russian cargoes are still able to call at ports for the time being.

Greenpeace said 12 activists occupied a jetty on Sunday evening in Navigator Terminals' Thames site in Essex, where the Greek-flagged Andromeda oil products tanker was expected to discharge its cargo.

"Ministers have kicked a ban on Russian oil imports to the end of the year despite strong public support for it," said Georgia Whitaker, oil and gas campaigner with Greenpeace UK.

Essex Police said on Monday that officers had been called to the Navigators Terminal late on Sunday evening.

"So far eight people have been arrested on suspicion of aggravated trespass and we’re working with our partners to bring a number of others to safety," it said in a statement.

In recent weeks, a number of ships carrying Russian cargoes have changed course after protests in both UK and EU ports.

A spokesperson for Navigator Terminals referred comment to Essex Police.

The tanker's Athens-based manager, Tsakos Columbia Shipmanagement, did not immediately respond to a request for comment.