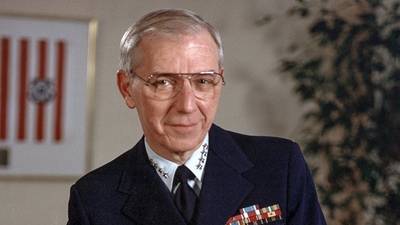 Born in Newton, Mass. in 1927, Adm. Gracey graduated from the United States Coast Guard Academy in 1949. Adm. Gracey was a 1956 graduate of the Harvard Graduate School where he earned a Masters Degree in Business Administration.

Adm Gracey served as Commandant from 1982 until his retirement in 1986. During his tenure, Adm. Gracey successfully steered the service through difficult budget climates and prevented privatization of many missions, including search-and-rescue. He oversaw major asset overhauls and the addition of new capabilities to the fleet, including additional Famous-class medium-endurance cutters, Island-class patrol boats and HU-25A Falcon aircraft. He delivered Coast Guard support for U.S. military and joint international operations, including the 1983 invasion of Grenada and Operation Blue Lightning, an interagency Task Force established in South Florida that linked efforts with the Government Commonwealth of the Bahamas to seize record amounts of illegal narcotics. Admiral Gracey stated his greatest accomplishment during his tenure as Commandant was "the ability to keep the USCG afloat, keep it on an even keel, and keep it moving forward."

Adm. Gracey is survived by his wife of almost 71 years, Randy; their daughter, Cheryl, and son, Kevin; three grandchildren and two great-grandchildren. He was preceded in death by his daughter Pamela.

The National Ensign shall be flown at half mast in Adm. Gracey’s honor on all Coast Guard buildings, grounds, and vessels not underway from sunrise on Thursday, April 9 until sunset on Wednesday, April 15.