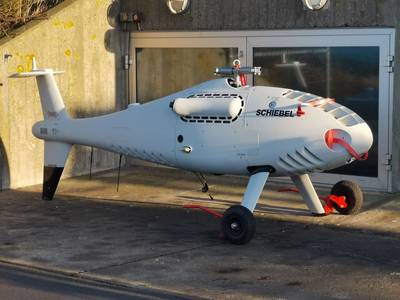 A new aerial drone is being tested to monitor vessel emissions in the Great Belt, a busy shipping lane between the islands of Zealand and Funen in Denmark.

Having previously been used for various surveillance tasks, the drone is being provided by the European Maritime Safety Agency to operate over the next four months in a specific area north of the Great Belt, which connects the Baltic Sea to the Kattegat strait and Atlantic Ocean.

The drone will fly into ships' exhaust gas plumes and use its so-called “sniffer technology” to register the sulphur content in the fuel. These data are immediately available to the Danish Environmental Protection Agency, who can then follow up if a ship is emitting too much sulphur.

Several Danish authorities have cooperated to get the drone from EMSA in action above Danish waters. The test project is carried out in a collaboration between the Ministry of Environment and Food of Denmark, the Danish Environmental Protection Agency and the Danish Maritime Authority.

This is the second time EMSA is testing a sulphur-sniffing drone in Denmark. Last year, a different model patrolled in the area for three months.