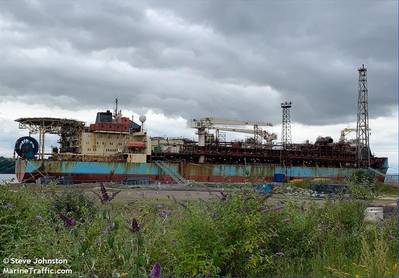 Oil company Shell has awarded Norway's AF Gruppen a contract for the dismantling and recycling of the Curlew FPSO.

The Curlew is an FPSO which was deployed at the Curlew field in the UK North Sea in 1997, approximately 210km east of the Aberdeenshire coastline, Scotland, and 55km west of the UK/Norway median line, in a water depth of 93 meters.

After more than two decades in production, the FPSO was last year towed to Dundee for cleaning and waste disposal in preparation for full decommissioning.

According to available information, there had been plans to then move the FPSO to Turkey for scrapping, however, it has now been decided to decommission the FPSO in Norway.

The Curley FPSO is expected to arrive at AF Environmental Base Vats in Rogaland, Norway, in Q3 2020. The base is custom built to handle offshore installations and other marine structures.

AF Gruppen said that the Curlew FPSO dismantling project would be completed in 2024, at the latest.