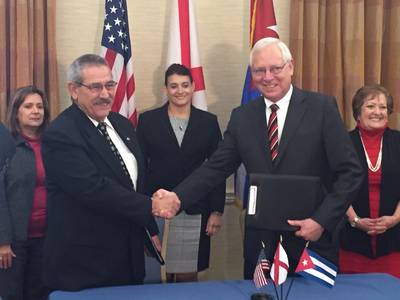 The Alabama State Port Authority has announced a new memorandum of understanding with the National Port Administration of Cuba, potentially laying the groundwork for future trade deals.

The five-year, cooperative agreement  was signed at the Tampa Marriott Waterside Hotel in Tampa, Florida.
Memorandum of Understanding (MOU) between the Port of Mobile and the Cuban ports marks the first ports agreement signed on U.S. soil since 1959.
James K. Lyons, chief executive officer of the Alabama State Port Authority and Rene Rolando Fernandez de Lara Cabezas, director of Inland Waterway and Sea Transport, of the Republic of Cuba Ministry of Transportation, acknowledged mutual interest in facilitating trade growth and promoting all water carrier services between Asia, Europe, Latin America and the U.S. Gulf Coast.
“We are seeing increasing demand for normalized trade between the United States and Cuba, and it is our goal to foster relationships between the ports and their maritime communities to further changes in U.S. Cuban trade policy and facilitate improved ocean carriage services to the benefit of our shippers,” said Lyons.
U.S. sanctioned trade between Alabama and Cuba principally include poultry and forest products. Under the MOU, the Port Authority and the National Port Administration commit to collaborating in port and cargo marketing studies and strategies, engaging in promotion and exhibition activities, and sharing data to the mutual benefit of their respective seaports as allowed under governing law in both countries.
In October 2016, the U.S. Treasury Office of Foreign Assets Control (OFAC) eased the rule that prohibits a vessel that calls Cuba from entering a U.S. port within 180 days of its departure from Cuba.
While the amendment may allow vessel operators to efficiently deploy their vessels and avoid the 180-day waiting period, ocean carriers must nonetheless comply with all other U.S. restrictions in order to take advantage of the amended rule.
Simply put, ocean carries engaged in sanctioned trade between Cuba and the United States can take advantage of the 180-day rule waiver. In addition, ships originating from worldwide ports and transiting through Cuba can take advantage of the waiver as long as the carrier does not load non-sanctioned cargoes bound for the U.S.
Currently, ZIM Integrated Shipping Ltd provides bookings between the Port of Mobile and the Port of Mariel, Cuba.
The Alabama State Port Authority owns and/or operates the public deep-water port facilities at the Port of Mobile handling over 25 million tons annually.
The U.S. Army Corps of Engineers Waterborne Commerce Center in 2015 ranked the Port of Mobile 10th largest U.S. Seaport in total trade handling in excess of 58 million tons.
The Authority’s container, general cargo and bulk facilities have immediate access to two interstate systems, five Class 1 railroads, and nearly 15,000 miles of inland waterway connections.