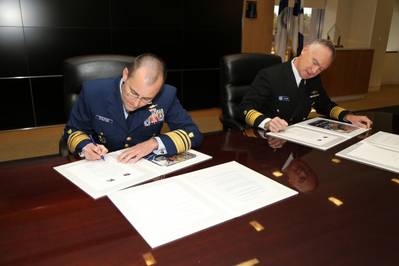 Senior leaders from the U.S. Coast Guard (USCG) and the National Oceanic and Atmospheric Administration (NOAA) signed a Fleet Plan and Officer Exchange memorandum of understanding Wednesday at a ceremony at U.S. Coast Guard Headquarters.

The Coast Guard and NOAA have collaborated for more than 200 years. The Fleet Plan supplements the Cooperative Maritime Strategy agreement that was signed in February, 2013, and establishes a course of action to guide cooperation in the operation and maintenance of marine and aviation platforms. This direction also expands valuable inter-agency work currently underway, such as repairing NOAA ships at the Coast Guard Yard in Baltimore and advancing Arctic preparedness through collaboration with the Coast Guard’s Arctic Shield test and evaluation program.

The Officer Exchange MOU supports both the CMS and the Fleet Plan by allowing the exchange of officer personnel for the purpose of sharing professional knowledge, expertise, doctrine and for the professional development of officers. Coast Guard officer candidates and the NOAA Corps already train together at the Coast Guard Academy in New London, Conn.

“The Fleet Plan and Officer Exchange MOU build on the long history of cooperation between NOAA and the Coast Guard. Our shared responsibilities in serving the American people’s interests in the maritime domain are fortified by our even closer relationship,” said Michel.

“NOAA and the Coast Guard share a commitment to providing the highest level of service to the nation,” said Devany. “These important agreements provide a framework for leveraging our respective resources and enhancing collaboration where we have common interests regarding personnel, fleet operations, research and development.”

NOAA Commissioned Officer Corps and the U.S. Coast Guard Officer Candidate School will both be participating in the officer exchange.