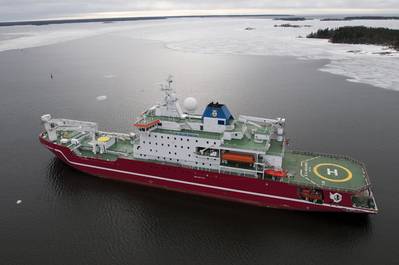 The Polar Research Vessel S.A. Agulhas II has been built by STX Finland for the South African Department of Environmental Affairs (DEA). The ship is a modern and sophisticated research vessel, commissioned to the DEA in May 2012, built to replace the S.A. Agulhas after 33 years of service.  The ship will support the South African National Antarctic Expedition (SANAE IV) base on the Antarctic continent, a base which conducts research in the fields of physical sciences, earth sciences and life sciences.  It will provide support to the base by carrying supplies, personnel and researchers to the base as well as to Marion and Gough Islands where biological, environmental and climate change research takes place. The modified vessel will also allow for mobile research to be conducted as it consists of eight permanent and six containerized laboratories. In addition to climate change and scientific research, the vessel has a weather station that transmits continuous data back to South African Weather Services. Marine life observation, which is a key indicator of climate change around the world, will also be conducted on the ship through observation towers. In March 2012, S.A. Agulhas II underwent sea and ice trials before her maiden voyage to Cape Town in April. Both trials were commissioned in the North Bay of Bothnia, Finland over a five-day period where all aspects of the ship was tested.  A seminar took place on the S.A. Agulhas II Full-scale Ice Measurement Project, which was held over three days from the September 10-12, 2012 at the picturesque Stias Wallenberg Conference Center at the South African Stellenbosch University campus. The consortium included, representatives from STX Finland, the Department of Environmental Affairs South Africa (DEA), DNV, Professors and students from the Universities of Aalto and Oula in Finland and Stellenbosch University South Africa; gathered to share results from the ice trials on the new S.A. Agulhas II held earlier in 2012
Professor Pentti Kujala, a professor in Marine Traffic Safety at the Aalto University in Finland, has been doing research in his field for 35 years on different vessels, however this is the first vessel that he can do measurements both in the Baltic Sea and in Antarctica. The aim of his study was to measure the ice loading on the hull and on the propulsion. “The ship is going in ice so we want to know what kind of load the ice is causing on the hull and the propulsion so we can develop our design methods in long term.”
The results were determined in the Baltic Sea in half a meter ice, which is quite thin. The measurement of ice loads of the ship’s hull and propulsion will be an ongoing study as the S.A. Agulhas II departs for the Antarctic in December where further measurements will be made by Professor Kujala and his research team.
The Stellenbosch University’s research aim was to create a scientific basis for the design of ice-going ships, in particular the relationship between operational conditions and ice load on the hull and human comfort in terms of vibration and sound. The contribution of the Sound and Vibration Research Group of the University of Stellenbosch was to aid in the assessment of occupant dynamic and acoustic comfort associated with these various ice load conditions in order to contribute to the development of occupant comfort metrics for ice- going vessels. The focus was rather to measure dynamic seat comfort in one location under a variety of ice-loading conditions, rather than the measurement of a variety of seats under different ice loading conditions. The results proved that most significant vibration was experienced when the ship was breaking out of channel in reverse, reversing straight in a freshly broken channel, cruising through level ice with ridges, cruising through rafted ice with ridges and when the ice level experience vibrations with magnitudes roughly ten times higher than those on the bridge. “The Captain was not uncomfortable at all in his seat,” said Doctor Annie Bekker, a Stellenbosch University Senior Lecturer and Researcher.
Classification society Det Norske Veritas (DNV) had its own objective of study on the ice trials: to test the dynamic response in shaft line reacted to ice-loads on propeller bladesk as well as the interior noise measurement onboard.

(As published in the December 2012 edition of Maritime Reporter - www.marinelink.com)