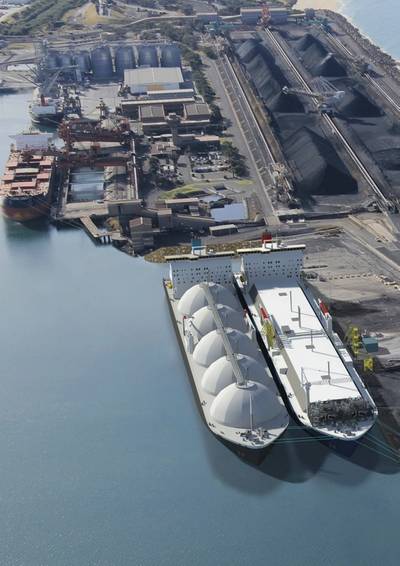 Australian Industrial Energy (AIE) said it has reached a preliminary agreement with EnergyAustralia to provide 15PJs of natural gas per annum, from its Port Kembla gas terminal (PKGT).

PKGT is one of five proposed LNG import terminals that could help meet a looming gas shortage in southeastern Australia, even as the country is set to become the world’s top LNG exporter.

Commencing 1 January 2021, the five-year contract will supply gas for EnergyAustralia’s residential and industrial customers as well as for electricity generation.

This announcement follows the NSW Government’s decision in April 2019 to award development consent to AIE’s PKGT, creating a pathway for the terminal to be constructed by midlate 2020.

The AIE Joint Venture Partners: Andrew Forrest’s Squadron Energy; global energy infrastructure investor Marubeni Corporation; and the world's largest buyer of LNG, JERA Co.  are delighted to welcome EnergyAustralia as a customer, the first of many agreements AIE expect to announce over the coming months.

Ross Edwards, EnergyAustralia Executive – Markets said: “As a major player it’s our job to provide our customers with the energy they need, in the form they need it and as cheaply as we can.

“Natural gas remains a big part of Australia’s supply mix and it has an important role to play in a modern, cleaner energy system, alongside renewables and technologies like batteries and pumped hydro.

“But new supplies are desperately needed. We think commercial, market-based solutions are the best, most efficient way to fill the supply gap and ease pressure not just on gas prices, but power prices, too.”

Speaking on behalf of the AIE Joint Venture Partners, Squadron CEO Stuart Johnston said: “Our agreement with EnergyAustralia shows that the Port Kembla gas terminal is a real solution for Australian energy retailers and manufacturers looking to avert the looming gas supply crisis.”

“We have negotiated a market competitive, oil linked price with EnergyAustralia. It’s an agreement that provides their business with certainty in the face of increasingly challenging domestic gas market supply,” he said.

“Further to our agreement with EnergyAustralia, AIE is deep in negotiations with a range of industrial businesses looking to sure up supply over the coming years. It’s clear from the conversations we are having with prospective customers that they want to take decisive action to secure their positions through the short to medium term,” Mr Johnston continued.

The commitment by EnergyAustralia will provide a significant underwrite against the annual capacity of AIE’s PKGT. It represents another major step towards making the PKGT a reality within the next 18 months.

The AIE joint venture partners expect to make a final investment decision to proceed with the terminal in the next few months, subject to further firm customer contracts.