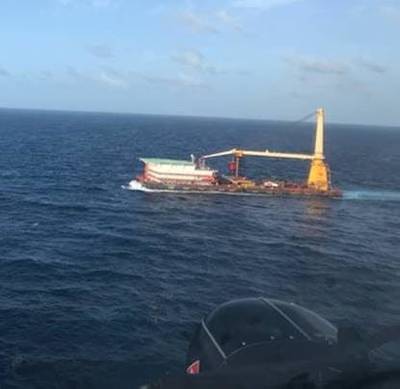 Watchstanders at Coast Guard Sector San Juan received a call from the DB Superior Performance barge reporting a medical emergency for a 46-year-old crewmember who was experiencing possible cardiac distress and required specialized medical care ashore. At the time of the emergency, the tugboat Crosby Leader was towing the barge on a voyage from Brazil to the U.S.

Coast Guard watchstanders directed the launch of an MH-60T Jayhawk helicopter from Air Station Borinquen to conduct the medevac. Upon arriving on scene, the helicopter crew lowered their rescue swimmer, along with a rescue basket, who worked with the crew to secure patient and hoist him aboard the aircraft.

The Coast Guard helicopter transported the patient to the Fernando Luis Ribas Dominicci Airport in San Juan, Puerto Rico, where awaiting Emergency Medical Service personnel received and transported him to the Pavia Hospital in San Juan.

“The crew was put together on extremely short notice, however, everyone did their part to ensure a successful outcome despite the challenging conditions,” said Lt. Shea Smith, Coast Guard MH-60T aircraft commander for the case. “This goes to show the importance of standardization within the aviation community. It was a great case with an excellent outcome. We are happy we could help a fellow mariner in distress get to a higher level of care.”