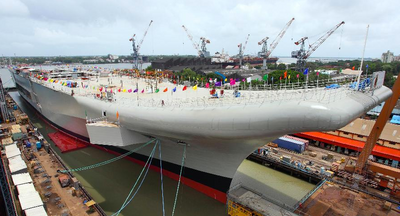 The 37,500 tonne INS Vikrant is expected to go for extensive trials in 2016 before being inducted into the navy by 2018, reports the BBC. With this launch, India joins a select group of countries capable of building such a vessel.

The launch of INS Vikrant marks the end of the first phase of its construction. The ship will be then re-docked for outfitting and further construction. The new aircraft carrier has a length of 260m (850ft) and a breadth of 60m, having been designed and constructed locally using high grade steel made by a state-owned steel company.

Vice-Admiral RK Dhowan of India's navy, cited by the BBC, has described the launch as the crowning glory of the navy's programme to produce vessels on home soil.