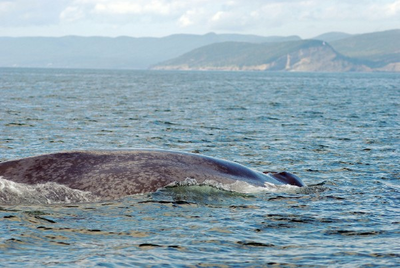 Algoma Central Corporation, the largest fleet of dry and liquid bulk carriers on the Great Lakes–St. Lawrence Waterway, is adding the crews from 27 of its vessels to an expanding network of whale watchers.

For the first time, the crews on Algoma’s self-unloaders, bulkers, tankers and cement carriers will collect data about the whales they see on their journeys this summer.

"Algoma is committed to providing sustainable and environmentally responsible marine transportation,” said Gregg Ruhl, Algoma’s Chief Operating Officer. “Taking part in this conservation initiative and bringing the power of our fleet to gather more data and better understand the whereabouts of marine mammals will support research that can help minimize our environmental impact.”

The data collection being led by the Marine Mammal Observation Network (MMON) and supported by Green Marine, now encompasses more than 50 vessels, along with observations made from shorelines and ferries in Matane, Godbout, Baie-Comeau, Rivière-du-Loup, Trois-Pistoles and Les Escoumins and through an evolving collaboration with marine pilots.

Special training was provided to Algoma vessel Captains earlier this year and information materials provided to crews to raise awareness about the different marine mammals that could be encountered on their journeys and to acquire more knowledge about these animals. Many of Algoma’s vessels operate in the Saint Lawrence Estuary, where they may come across beluga, harbor porpoise, minke, blue, fin, and humpback whales. Several vessels also navigate in the Gulf of St. Lawrence and on the Canadian and U.S. East Coast, where they could also come across dolphins, pilot whales, and North Atlantic right whales.

MMON initiated the maritime industry’s participation in the data collection about marine mammals in 2015 with Groupe Desgagnés and Canada Steamship Lines, a division of the CSL Group. Green Marine subsequently became a part of the project financed by the Government of Canada through its Habitat Stewardship for Species at Risk program to develop the required training materials and facilitate networking with ship owners. The collected data is disseminated publicly through the St. Lawrence Global Observatory website.

“The maritime industry’s commitment to this project has extremely positive implications for whale conservation,” affirmed Esther Blier, MMON’s executive director. “In addition to collecting essential information, the initiative helps to educate crews about the presence of endangered whales within their navigational realm, and to take actions during these encounters to limit collisions, as well as report dead, entangled or injured whales. The collaboration also increases multifold the opportunities to sensitize crews to respect voluntary measures that benefit whales, such as the voluntary speed reduction established in the St. Lawrence Estuary.”

“Algoma’s participation almost doubles the number of vessels taking part in the whale watching initiative,” noted Véronique Nolet, Green Marine’s program manager responsible for training crews to identify whales and report sightings. “The additional observations by Algoma’s crews will lead to more reliable data for both the scientific community and the maritime industry operating within these waters.”