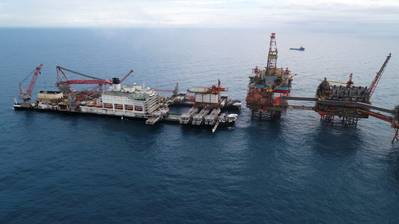 Pioneering Spirit safely removed the 3,800 t QP topsides in June 2019 and will return to remove the DP and PCP platforms and connecting bridges - Image Credit: Allseas

The company said on Wednesday that Aker BP had awarded it a deal for the removal and disposal of multiple topsides and jackets from the Valhall area in the Norwegian North Sea. Allseas will use its flagship Pioneering Spirit heavy lift vessel for the job.

Allseas said that the contract was the latest award triggered by Aker BP under the terms of the frame agreement signed with Allseas in 2017 to provide transport, installation and removal services for the Valhall oil field.

Allseas’ heavy lift vessel Pioneering Spirit will execute the work between 2021 and 2026. Water depth at the field is approximately 70 m. Platform preparations are scheduled to begin later this year, continuing into the 2021 lift season, Allseas said.

In addition, Aker BP has invoked the option for the removal and disposal of the Valhall Quarters Platform (QP) jacket and the 2/4-G jacket on the Ekofisk field, 24 km north of the Valhall complex.

This option was associated with the 2017 award for the removal and disposal of the QP topsides, removed by the Pioneering Spirit in June 2019. See the video of that operation below.

The QP topsides was the first of the three original structures (QP, DP, PCP) at Valhall to be removed as part of the modernization of the Valhall field centre by Aker BP.

Hod is remotely operated from Valhall and was the first unmanned platform in the Norwegian sector of the North Sea when production started in August 1990.