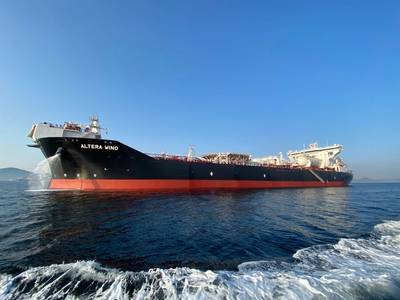 The 103,000 deadweight tonne newbuild is the sixth and final in the series of DP2 shuttle tankers using liquefied natural gas (LNG) fuel and recovered volatile organic compounds (VOCs) as a secondary fuel, as well as battery packs for flexible power distribution and blackout prevention.

The Norwegian-flagged vessel is built to DNV's Battery Power notation and has a 1,808 kWh battery pack installed to reduce fuel consumption and emissions by peak shaving, prevent blackouts, and improve safety during dynamic positioning (DP) operations by replacing power from one generator if needed.

Altera Wind's sister vessel Altera Wave, delivered in January 2021, was able to maintain 6-7 knots for almost 20 minutes on batteries only.

Altera, previously known as Teekay Offshore, currently has another newbuild due for delivery in early-2022 that is slated to operate off Canada's East Coast.

French engineering firm GTT said it has developed the NO96 Super+, an evolution of the NO96 Cargo Containment System (CCS)…