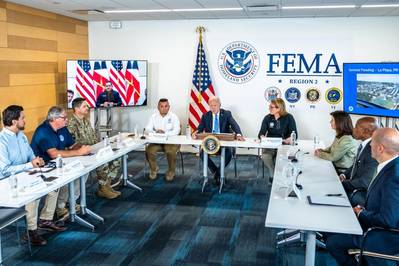 The president of a U.S. maritime trade group has slammed a decision by the Biden administration to approve a temporary Jones Act waiver for vessels shipping oil and other essential commodities to Puerto Rico in the wake of hurricane Fiona.

“Granting of this waiver rewards calculated and predatory behavior that undermines a dedicated American supply chain for Puerto Rico, and it is a harmful precedent that invites similar cynical stunts by foreign oil traders,” said Ku’uhaku Park, president of the American Maritime Partnership.

“This was a public rush to judgment fueled by hearsay and it weakens the nation and hurts American workers and the Administration should never repeat it,” Park added.

The Jones Act is a law that requires goods moved between U.S. ports to be carried by vessels that are U.S. built, owned, operated and crewed. On Tuesday, Puerto Rico Governor Pedro Pierluisi asked the White House for a waiver to increase the availability of fuel after the storm, despite reports that vessels were having no trouble making deliveries to the storm-hit island within the rules of the Jones Act.

Hurricane Fiona slammed Puerto Rico on September 18, and in the storm's wake, GH Parks, a Marshall Islands-flagged tanker reportedly linked to U.K. oil giant BP, made its way to Puerto Rico's southern coast after loading 300,000 barrels of diesel from Texas, according to ship tracking data, in a move viewed by many in the industry as "disaster arbitrage".

“American Maritime has been meeting and exceeding the needs of Puerto Rican residents in the wake of Hurricane Fiona and there continues to be absolutely no justification for a waiver of the Jones Act, as the U.S. Coast Guard, FEMA, the Corps of Engineers, and the U.S. Department of Energy all have made clear that the supply of fuel to the Island is not an issue,” Park said earlier this week.

“This stunt by a foreign oil company showing up unannounced in Puerto Rico while on its way overseas hoping to sell its fuel at a premium to Puerto Ricans in need, and thereby triggering a public and political rush to judgment, is bad precedent, a circumvention of U.S. law, and should never be tolerated.

“American Maritime is dedicated to Puerto Rico and while foreign oil traders seek to line their pockets at the expense of the Puerto Rican people, we will always be committed to our fellow citizens, including our own employees and their families, in Puerto Rico.”