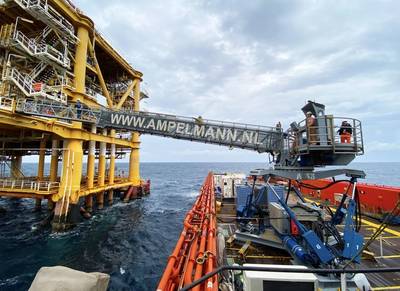 Ampelmann, a Dutch company providing crew transfer gangways to the offshore energy industry, has said it has achieved a milestone of one million safe personnel transfers in the Middle East.

The company said Wednesday that the milestone, which it took nearly a decade to achieve, was achieved during a project with vessel owner Halul Offshore Services, a subsidiary on Milaha.

The millionth transfer crew transfer was made via Ampelmann's A-type system, that has been operating on the Halul 43 vessel since the beginning of 2020, and will continue to do so for a minimum of 150 days.

The A-type is a motion-compensated gangway system designed to transfer 20 personnel in under five minutes as well as move cargo loads up to 100kg with the KIB cargo basket from vessels to offshore structures.

The Dutch Walk to Work (W2W) company, which provides in-country and regional support to clients from its Doha office, sees an opportunity for expansion both in Qatar and in the region.

"The company currently has nine ongoing projects in the region, most of which are long-term, providing accommodation support for a variety of oil majors. Seven of those projects are for operations off the coast of Qatar," Ampelmann said.

Jayne Moran, Area Manager Middle East & Caspian at Ampelmann says: "We see huge potential for further expansion in Qatar and throughout the region with local partners such as Milaha, as oil and gas operators become increasingly aware of the benefits offshore access can bring to their operations."