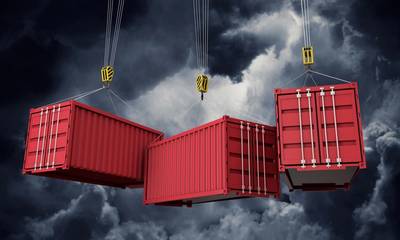 Facing global economic headwinds, the volume of containerized cargo movement continues to plummet, Peter Sand, Chief Analyst, Xeneta, summarizes: “It is clear that the carriers are no longer in charge, the shippers are.”

You are absolutely right: these numbers confirm what we have seen in Xeneta data for the past couple of months, a literal meltdown of the spot market. I'm the first one to admit that I did not see this torrent coming with such thunder, but it makes sense if you look at it from an economic perspective, and we have been surprised (positively) for quite some time that consumber demand [has held up for as long as it has]. [As the economies continue to worsen] shippers and carriers are really trying to find shelter, with really nowhere to go.

If we get back to the meltdown on the Transpacific we see in Xeneta data that it's a drop of 31% from Far East to US west coast in the month of September compared to the same month last year. We see it is down almost 10% for the first three quarters of the year. This is driven also by a drop of 22% from Far East into north Europe [trade].

What are the carriers doing right now to stem this decline? We continue to see ‘blank sailings’, pulling a lot of capacity that was scheduled to be deployed towards the end of the year, anticipating that shipping freight rates and markets still defy economic gravity. Now we know that the only way to stop this dramatic decline is capacity management.

When we have a crisis coming at the pace of the current one, we see those investors and shipping lines that have made the [orders] for new ships calling directly to the builders saying, "perhaps we can postpone some of those ships that I planned taking next year." Currently we have 1,000,700 TEUs to be delivered next year, and I think it's fair to say that carriers will need to work hard with their shipyards to postpone or delay [deliveries]. But it seems to be somewhere between five and six percent of sheer nominal capacity growth in the container shipping sector. The more scrapping you get, the more [newbuild delivery] postponement you get, the closer you will get to five percent. But currently, we stick to our estimate around six percent. And time will, of course, always give us the damn truth in what will actually be delivered. But I think it's fair to say that tables are turned. Carriers are no longer calling the shots, shippers are.