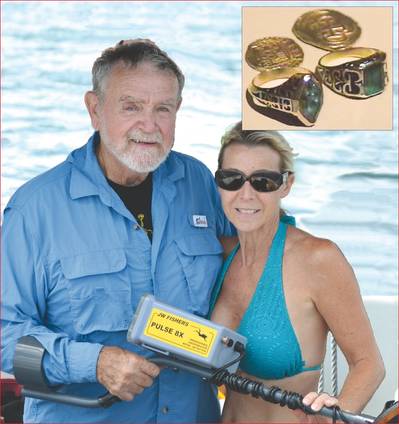 2015 will mark the 300th anniversary of the sinking of a dozen Spanish ships known as the 1715 Plate Fleet; plata being the Spanish world for silver. On the 30th of July 1715 twelve galleons, overloaded with Mexican gold and silver, left Cuba and sailed north carried by the Gulf Stream.

Just off the coast of Florida between present day Sebastian and Fort Pierce they were struck by a ferocious hurricane.  Some of the ships sank in deep water, some broke up in shallower water, and others ran aground near shore. Only a tagalong French ship named Grifon, managed to survive, sail on, and report the disaster. It was one of the greatest tragedies to befall any Spanish treasure fleet with the loss of more than 1,000 lives and 14 million pesos, plus an equal or greater amount of contraband, all swept into the sea. The cargo was scattered over several miles and to this day Spanish coins still wash up on Florida beaches.

Over the next four years the Spaniards undertook several salvage operations and managed to recover a significant portion of the treasure; about half the registered part. This still left a vast amount of gold and silver lying on the ocean floor.

Modern day salvage began in the late 1950s. It all started when a local resident, Kip Wagner, found a Spanish coin called “piece of eight” on the beach after a storm. His curiosity piqued, Wagner rented a small plane and flew over the shallows just off the beach until he spotted what appeared to be the remains of a ship. Traveling to the site by boat, he verified it was a very old wreck. Wagner then obtained a permit from the state of Florida, gathered a team of divers and began recovering treasure. They quickly discovered getting to the booty was not an easy task. To remove the sand required use of a dredge and suction apparatus, which eventually evolved into the “mailbox”, a curved pipe that was used to divert the prop wash down onto the wreck site. The state stipulated that it would take 25% of the finds of their choice, with the rest going to the salvors. The state typically claimed the artifacts; the gold and silver coins, ingots and bars were kept by the salvage company. This arrangement between salvors and the state went on for years with many divers obtaining permits for large plots of the ocean floor and trying their luck at the treasure hunting game. Some, like Mel Fisher, hit it big and became celebrities.

Another of the more remarkable men drawn to this life of adventure is Captain Carl Fismer. For more than 40 years “Fizz”, as he’s called by associates, has traveled the world searching for, and recovering, treasure and artifacts. He’s often referred to as; a real life underwater Indiana Jones. He worked with Mel Fisher on the world famous Atocha shipwreck and dove on ancient sites in Sri Lanka with “2001: A Space Odyssey” author Arthur C. Clarke. Fizz also chased treasure with celebrity diver, John Chatterton, co-host of History Detectives TV show and subject of the book Shadow Divers. Because of his extensive experience Fismer was chosen to host his own show, the Dish TV series “Treasure Divers”. Capt. Carl has recovered millions in gold in silver over the decades, and is still diving on 1715 wreck sites today. Some of his best finds include a conglomerate with more than 500 embedded silver coins weighing almost 30 pounds and several beautiful 300 year old gold rings assumed to have been worn by ship’s officers or aristocrat passengers. Fismer is a recipient of the prestigious Mel Fisher Lifetime Achievement Award which is presented annually to a person who has shown “immense perseverance in following their Quest in Life. Such a quest would exemplify the person’s ability to achieve in life what others might only dare to dream.” He recently inherited all the records of another famous treasure hunter, Jack Haskins, who researched and dove on wrecks for decades. With information culled from these documents Fizz and his team are now working several new wreck sites in the Caribbean and central America.

His tool of choice for finding underwater treasure is JW Fishers Pulse 8X, a commercial-grade detector in use by professional treasure hunters, marine archaeologists, commercial divers, police and military units worldwide. The Pulse 8X is so widely recognized as the “tool of choice” for recovering underwater treasure it was featured in several Hollywood movies including Fool’s Gold and Into the Blue.

A few of the many other groups using this detector in their shipwreck recovery work are the Odyssey Marine, the Center for Archaeological Studies at Texas State University, the Archaeological Institute at the University of West Florida, the Office of Underwater Science and Educational Resources at the Indiana University Bloomington, the underwater archaeology program at the University of Rhode Island, the Center for Marine Archaeology and Conservation at Texas A&M University, and the Israeli Antiquities Authority, and the African Slave Wrecks Project.