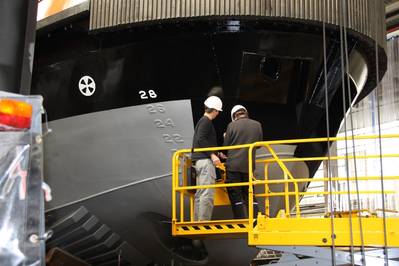 Port of Amsterdam starts with sustainable film on patrol vessel.

Damen Shipyards (Gorinchem, Netherlands) and the Port of Amsterdam are launching a pilot project  to test Thorn-D, a relatively new antifouling film that is applied to ships’ hulls below the water line. The film has an expected lifetime of five years. That is much longer than conventional antifouling coatings, which need to be replaced every six months on average. Dr Rik Breur, the founder of supplier Micanti, developed the film and tested it extensively on trial surfaces and work vessels. That attracted the attention of the Port of Amsterdam, which is concerned about the safety and sustainability of its vessels. “The film is an excellent additional application.”

Damen is applying the antifouling film to one of the Port’s patrol vessels, and will complete the work on Tuesday. “We’re using two boats in the pilot project: one with the film and the other with a conventional antifouling coating,” says Willem Spoelstra of the Port of Amsterdam’s Nautical Division. “The pilot will run for a year and we’ve agreed with Micanti that the film has to remain problem-free for at least two years. They’ve given us certain guarantees concerning durability and so on, in any event. We can now assume that the film will not come off. The great thing about this test is that the two vessels will be operating in precisely the same area. That’s ideal for a pilot project.”

The film is being marketed internationally under the brand name Thorn-D. Breur, the managing director and owner of Micanti, and Eric Pieters, the firm’s commercial director and co-owner, can already point to their product’s proven performance. Two vessels – one a tug belonging to Dutch company BMS Towing and another located in Florida – have already been operating for some time after application of the antifouling film. The film has so far been tested up to 30 knots.

“We can now say that we’ve achieved a breakthrough with our application: we’ll be applying our film to a fleet of approximately fifteen work vessels and crew vessels in the months ahead,” says Pieters. “They include boats run by towing companies in the Netherlands, the Middle East and a tug owned by the Port of Los Angeles.”

It’s no surprise that Damen is involved in this innovation. The Dutch shipyard has shown itself to be in the vanguard when it comes to environmentally friendly, innovative and cost-efficient shipbuilding. It will no doubt be using the Thorn-D antifouling film on more of its vessels.