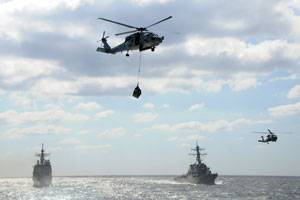 The guided-missile cruiser USS Gettysburg (CG 64) apprehended six suspected pirates in the Gulf of Aden on March 20 after responding to a distress call from two nearby merchant vessels.

At approximately 4:30 a.m., the Philippines-flagged Motor Vessel Bison Express sent a distress call to all ships in the area reporting they were being pursued by a small skiff containing six heavily-armed suspected pirates.

Gettysburg closed immediately on the motor vessel's location and intercepted a skiff matching the description given by the crew of the motor vessel. An SH-60B helicopter assigned to Helicopter Anti-submarine Squadron Light (HSL) 46 embarked aboard Gettysburg, flew overhead the skiff and reported seeing objects being thrown overboard.

A Gettysburg visit, board, search and seizure team (VBSS) subsequently conducted a consensual boarding along with members of U.S. Coast Guard Legal Detachment (LEDET) 409 and apprehended the six suspected pirates. They were transferred onto the amphibious assault ship USS Boxer (LHD 4), the flagship and afloat staging base (AFSB) for Combined Task Force (CTF) 151.

After evaluating the situation, CTF 151 determined there was not sufficient evidence to hold the suspects for prosecution and released them back to their small boat.

The attack on Bison Express was the second attack by yesterday on commercial shipping vessels in the Gulf of Aden. Earlier this morning, suspected pirates attacked Motor Vessel Sea Green. The motor vessel fired several warning flares at the suspected pirates as they approached, and successfully warded off the attack.

CTF 151 is a multinational task force that conducts counter-piracy operations in and around the Gulf of Aden, Arabian Sea, Indian Ocean and the Red Sea and was established to create a lawful maritime order and develop security in the maritime environment.