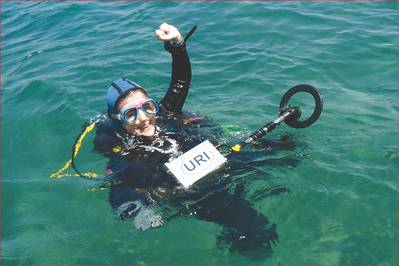 Many universities are adding or expanding their underwater archaeology programs in an effort to give students a broader educational experience and a better understanding of our maritime history.

The field of underwater archaeology is expanding rapidly as the equipment required for marine exploration becomes more affordable, and more scientists and researchers learn to scuba dive. Indiana University (IU) Bloomington has one of the oldest academic diving programs in the country. Professor Charles Beeker is the director of the school’s Office of Underwater Science and Educational Resources (USER) and also a member of the Marine Protected Areas Federal Advisory Committee, part of NOAA. He has directed numerous shipwreck projects in the US and Caribbean and is a pioneer in preserving wreck sites as underwater museums.  In addition to his extensive knowledge and experience in the history behind these submerged time capsules, he is also an accomplished diver.

The current focus of Indiana’s archaeology program is the wreck of the Quedagh Merchant. The ship was reportedly captained by the pirate William Kidd as he raced to New York in ill-fated attempt to clear his name.  The ship went down in 1669 off the coast of the Dominican Republic and the wreckage now lies in 10 feet of warm, clear Caribbean water, with cannons and anchors scattered about in plain view.  According to Beeker it is a unique example of 17th century ship construction. The location makes it ideal for in-depth archaeological study and the perfect place for students to put into practice the methods and techniques learned in the classroom. “How you put a name on a shipwreck is through scientific research, analysis of wood samples, determining composition of the ballast stones and the type of ship construction.” says the professor.

USER follows a multidisciplinary approach to underwater research drawing in students from six university departments. Their facility has a 1,000 square foot lab with numerous water-filled tubs holding recovered artifacts, including 19th century china that was on its way to the California gold rush from Hong Kong, and hand-blown ale bottles from Germany.  Two key pieces of equipment the group relies on to assist in locating artifacts are JW Fishers Pulse 8X hand-held underwater metal detector and the PT-1 pinpointing magnetometer.

Another institution actively involved in marine archaeology is the University of Rhode Island (URI). The university has an on-line Museum of Underwater Archaeology with information about shipwreck projects the school is involved with around the world. URI’s Dr. Bridget Buxton, an associate professor in the history department, specializes in ancient history and Mediterranean underwater archaeology. Buxton, an accomplished scuba diver, is working with Jacob Sharvit of the Israel Antiquities Authority (IAA) to investigate the area’s known shipwrecks, and to locate undiscovered sites. One wreck recently uncovered appears to be the remains of a famous lost warship from the Napoleonic siege of Acre in 1799, a wreck that historians have been trying to find for the last 50 years. Using their Pulse 8X metal detector the team located large copper nails, cannon balls, grapples, 18th century muskets, and other concretions. Future projects include searching for an ancient Greek multi-deck warship and trying to locate the lost Ptolemaic fleet from the Syrian Wars of C. 200- 150 BC. The lost fleet is thought to be in an area where the IAA has already recovered over 4000 silver tetradrachmas (ancient coins).

At Texas A&M University (TAMU) is the Nautical Archaeology Program, a degree-granting graduate curriculum, and the Center for Maritime Archaeology and Conservation with its eight laboratories. TAMU is also affiliated with the Institute of Nautical Archaeology (INA), a nonprofit private research institute, which works with the graduate program to give students field experience.  INA has been involved in a number of high profile projects such as surveying the remains of Alaska’s abandoned Gold-rush era steamboats and mapping the wreck site of the 28 gun British frigate HMS Solebay sunk in 1782 near the Caribbean island of Nevis. To assist in the discovery of artifacts on these sites INA is using a Pulse 8X detector.

In describing how his passion was ignited for this exciting and expanding field one student said, “Over the course of my undergraduate studies I became increasingly interested in history and archaeology. Then one of my professors discussed the merits of underwater archaeology, and the whole notion of conducting archaeology underwater hit me like a freighter. Shipwrecks are commonplace throughout the world and I’m taking for granted the rich maritime heritage that surrounds me.” As IU’s Professor Beeker so apply put it, “The students are our future. I want to know in 20 years from now, 50 years, 100 years, we still have these underwater sites. They have not been salvaged, but are living underwater museums protected for future generations. The passion and dedication of our students will help to ensure these sites are preserved.”