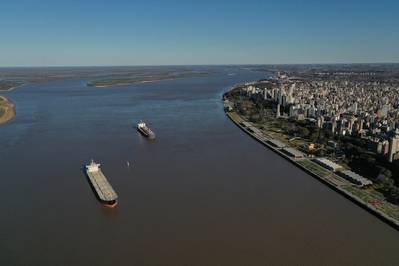 The government of Santa Fe province in Argentina late on Wednesday ordered port workers to suspend a day-old strike that had blocked grains shipments at the country's main agricultural export hub and mandated wage negotiations be resumed.

Protests by port construction workers in Argentina's key grains hub Rosario had snarled exports, with roads blocked at some of the area's key export terminals, an industry official told Reuters earlier on Wednesday.

The protest began late on Tuesday and on Wednesday spread to the districts of Puerto General San Martin and Timbues, north of Rosario, affecting shipments from Argentina, the world's No. 3 corn exporter and top supplier of soymeal livestock feed.

Employees represented by the UOCRA construction workers union want higher salaries from the construction firms that work for agro-export companies within port facilities.

"We have to abide by the order and continue the negotiations, which will take some time," Cristian Diaz, a UOCRA union delegate in San Lorenzo, Santa Fe province, told Reuters.

There had been pickets at the entrances to soy crushing and grains processing plants, halting port activity, Guillermo Wade, manager of the Chamber of Port and Maritime Activities, said early on Wednesday.

About 80% of the country's agricultural exports are loaded at Rosario ports and sent on cargo ships down the Parana River to the shipping lanes of the Atlantic.

Firms such as Cargill, Nidera and Louis Dreyfus have processing plants and ports in Rosario.