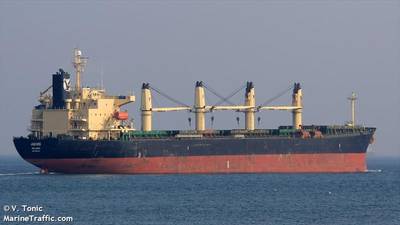 U.S. based shipowner Eagle Bulk Shipping said a security incident involving a disgruntled armed guard hijacking one of its vessels has been resolved without injuries.

The Marshall Islands-flagged bulk carrier Jaeger embarked three security guards in the Indian Ocean on July 21, before sailing toward the Red Sea, as the company has done for all transits through the high-risk area over the past 10+ years.

Once on board, one of the guards did not surrender his weapon to the vessel’s captain as is normal protocol. He took control of the 190-meter ship and deviated its course as he voiced his grievances and demanded compensation to settle an ongoing payment dispute with his employer. It was revealed that the guard was owed several month's wages from the unnamed security agency.

The guard discharged his weapon on board the vessel, but at no time did he directly threaten or harm any of the crewmembers, Eagle Bulk said. The remaining two guards did not participate in the hijacking.

Eagle Bulk said it worked with maritime security experts to deescalate the situation, and after a period of approximately three days, the guard surrendered his weapon and allowed the ship to continue on its original course. Relevant authorities were kept appraised throughout the incident, and the guard was disembarked July 30.

Eagle Bulk said it maintained regular contact with the captain throughout this event, and the vessel’s crewing manager V Ships also maintained an active dialogue with the crew’s families to keep them updated.