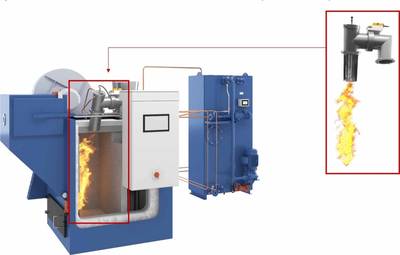 The new X10 Titan range from Atlas Incinerators is designed to save shipowners and shipyards money while shrinking their environmental footprint.

For decades it has been customary to use steam, electricity or thermal oil to heat sludge oil prior to its incineration. ATLAS Incinerators’ new X10 TITAN range, has been designed to incinerate sludge oil and simultaneously burn solid waste while consuming an absolute minimum of energy onboard ship.

While there is a significant improvement in the X10 Titan’s combustion specifications, the real game-changer according to the manufacturer is that the sludge oil does not have to be heated prior to being burnt, which means that the incinerator consumes an absolute minimum of energy.

“We’ve simplified and streamlined the entire incineration process,” said  Lars M. Lund-Jacobsen, General Manager Sales at ATLAS Incinerators. “Several of the operations that occur in conventional incinerators have been eliminated altogether from the X10 Titan series.”

This translates into potentially significant savings for shipyards, too, as there is no longer a need for heating elements or a control system, nor for several metres worth of piping, regulators or ball valves in the case of steam, helping to save on equipment costs as well as installation time and cost.

Bigger picture, the X10 Titan also makes a positive contribution to decarbonization. Since the sludge oil is no longer heated, the auxiliary engines emit less carbon and carbon dioxide into the atmosphere/

ATLAS Incinerators has managed to achieve this thanks to the combi oil burner that it has developed, which makes it possible to burn sludge oil without preheating it first. The X10 Titan has only one burner.

The control system on the X10 Titanhas also been upgraded to offer the latest in HMI technology, and the specifications of the X610 offer significant improvements compared with the ATLAS 600.

The X610, the first in the X10 Titan series, has obtained a MED-type approval certificate issued by DNV GL.