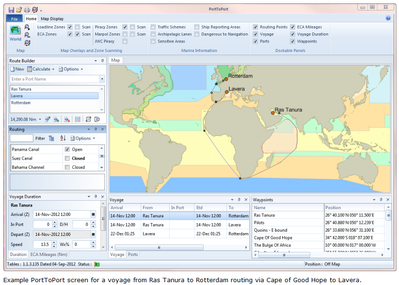 A recent upgrade to AtoBviaC’s end user applications for the BP Shipping Marine Distance Tables now means that users can adjust routes and obtain distances to match their own operations. The changes make it possible for the user to produce deviation reports following changes in voyage destinations.

AtoBviaCs’ new interfaces for the BP Shipping Marine Distance Tables are ‘Port to Port –Online’ and ‘Port to Port v4’. Both applications allow users to edit routes to meet their particular needs.

Captain Trevor Hall, Director of AtoBviaC explained, “The route editing facility and the associated route scanning allows users to determine their own preferred routes, either to route through piracy areas or to minimise costs associated with ECA legislation or to meet load line requirements. Any changes to routes may still take into account environmentally sensitive areas; ship separation schemes; geographic features and man-made obstacles which are retained features of the Distance Table’s applications. Additionally, all voyage details including maps and ECA distances can now be exported in pdf format.”

The BP Shipping Marine Distance Tables are widely used within the marine industry and contain all ports, offshore terminals and transshipment areas needed by its many users, particularly Worldscale, oil tankers, gas carriers (LNG and LPG), the container trade and the bulk shipping of coal and ore.