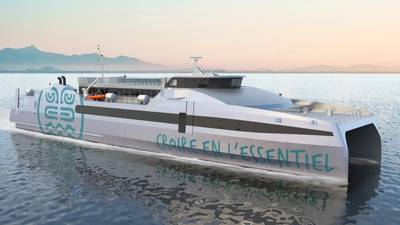 Australian shipbuilder Austal has been awarded a €20.5 million ( around USD 24 million) contract to design and build a 66-meter high-speed catamaran ferry for repeat client The Degage Group of French Polynesia.

The new Austal ‘Passenger Express 66’ catamaran features a length overall (LOA) of 66.4 meters, beam of 15.2 meters, and draft of 1.8 meters. Over two passenger decks, the vessel will be able to accommodate 574 passengers, with an additional 80 seats available on an external sun deck.

Crew accommodation includes 7 two-berth cabins and 2 single-berth cabins. The vessel will have four passenger access ramps and will be able to carry up to 16 tonnes of cargo loaded via two cranes.

Austal said it would start working on the new ferry in August 2021 at Austal Vietnam, with the delivery expected in the first half of 2023.

Austal Limited Chief Executive Officer Paddy Gregg said: "Over the past two decades The Degage Group has trusted Austal to design and construct five ships for their growing maritime and tourism operations in French Polynesia, and we’re delighted they have again chosen Austal to develop their latest high-speed ferry."

“The Degage Group are an acknowledged leader in commercial maritime transportation and tourism. This contract is a clear demonstration of confidence in our Vietnam shipyard, which recently delivered its second commercial ferry within a period of just two years."

To be fitted with four diesel engines and four waterjets, as well as Austal’s Motion Control System (including active interceptors and T-foils) and the  MARINELINK and MARINELINK-Smart programs, the new ferry will have a contracted top speed of 35.8 knots and a range of 360 nautical miles.

The new ferry will operate as the Apetahi Express, between Pape’ete (Tahiti) and Vaitape (Bora Bora).